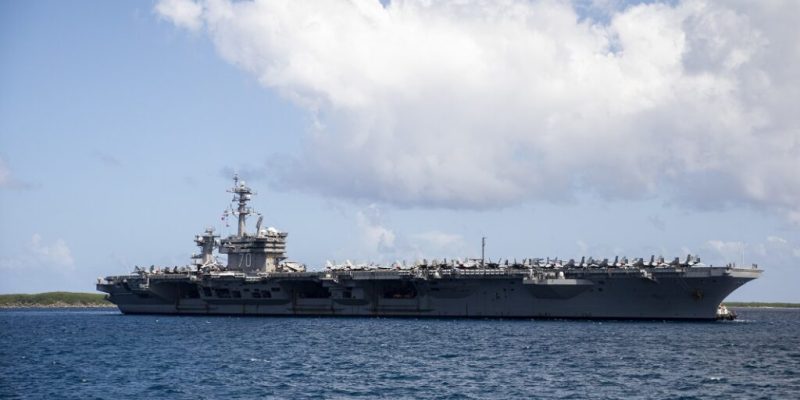 “Guam has been welcoming and is a steadfast supporter of U.S. strike groups operating in the region,” said Rear Adm. Dan Martin, commander Carrier Strike Group (CSG) 1. “Our crews are thankful to have this level of support after many weeks at sea and are looking forward to honoring veterans alongside the local Guam community. Our Sailors deserve this break and I am proud of their continued resilience and operational acumen as our strike group worked tirelessly alongside our regional partners and allies.”

Due to COVID-19 concerns during the ship’s visit to Yokosuka, this is the first time during the deployment that the crew of USS Carl Vinson will be authorized off base liberty.

“The men and women aboard our ship have worked diligently since we left home and their efforts have paid great dividends toward enhancing maritime security and regional stability in some of the most heavily navigated shipping lanes of the world,” said Capt. P. Scott Miller, commanding officer of USS Carl Vinson. “We are grateful for a chance to enjoy the hospitality and beauty of Guam which has been a home away from home for many Sailors throughout the years.”

The deployment marks the first time the “Air Wing of the Future” has been embarked with a U.S. strike group. Carrier Air Wing 2 is the first deployed U.S. air wing capable of advanced lethality and combat readiness with the addition of the F-35C Lightning II and the CMV-22B Osprey.

This marks the first time that a carrier strike group with the advanced capabilities of the F-35C Lightning II and Navy CMV-22B Osprey have visited Guam.

Check out Naval Library App to learn more about the specifications of the Nimitz-class aircraft carriers.

U.S. Navy exercises with Regional Partners in the Red Sea