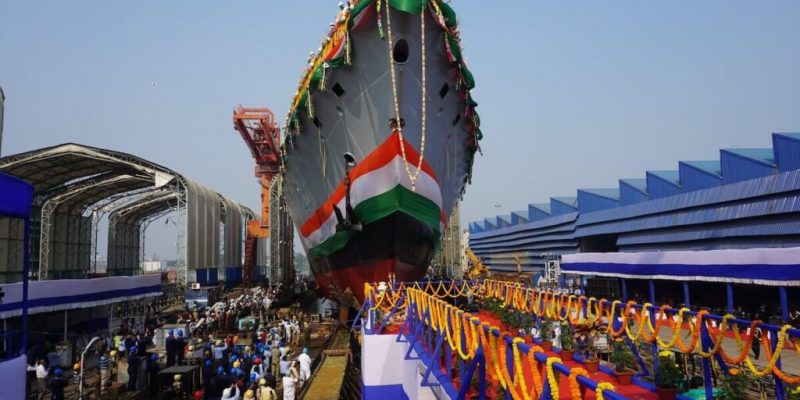 The press release shared by GRSE as follows;

“The contract for the construction of three Stealth Frigates under Project 17A is the largest ever order awarded to the Indian Ministry of Defence’s Shipyard. Despite all challenges amid Covid – 19 pandemics, the Shipyard launched 1st Ship of Project 17A Stealth Frigate “INS Himgiri” ahead of schedule on December 14, 2020. The Keel laying of Yard 3024 has also been achieved ahead of schedule. It is important to note that the Keels for both 1st & 2nd ships viz, Yard 3022 and Yard 3023 were also laid ahead of schedule on November 10, 18, and 24 Jan 20.

The critical milestones of shipbuilding involve the Cutting of steel called the ‘Start Production’ stage, followed by ‘Keel laying,’ after which the other blocks are built around the keel block. The next phase is launching. When the Ship is placed in water for the first time, the Ship is outfitted with equipment and systems post-launch, followed by equipment trials. On completion of all tests and once the compartments are ready, the Ship is delivered to the customer.

Project 17A ships shall be the most advanced state-of-the-art Guided Missile Frigates, 149 m long, with a displacement of approximately 6670 T and advanced CODOG Propulsion enabling speed of over 28 knots. These complex platforms are equipped with a powerful weapon & sensor package capable of neutralizing threats in all three dimensions ofAir, Surface & Sub-surface. Project 17A Stealth Frigates are being built using Integrated Construction Methodology with enhanced pre-outfitting to enhance quality and reduce build periods. M/s Fincantieri, Italy, is the Knowhow Provider for Technology Upgrade and Capability Enhancement in this project. An advanced PDM-PLM system is being implemented at GRSE to manage the project over its life cycle.

Since its takeover by the Government of India in 1960, GRSE has delivered high-end warships ranging from Fast Patrol Vessels, Survey Vessels, Landing Ship Tanks, Landing Craft Utility, Fleet Tanker to Frigates and Missile/ASW Corvettes. The Shipyard has made a significant advancement towards self-reliance in state-of-the-art warship design and construction and furthered ‘Atmanirbhar’ Abhiyan by achieving over 90% indigenous content onboard ASW Corvettes and Landing Craft Utility ships. Today, having modernized its infrastructure facilities, GRSE can construct 20 warships concurrently using Advanced Modular Integrated Shipbuilding Technology in line with the best in the world.

GRSE’s Design Unit has been recognized by the Dept. of Scientific & Industrial Research (DSIR). The 100+ member Strong Design Team has developed the complete designs of LCUs, Water Jet FACs, Survey Vessel (Large), and ASW – SWCs. The 3D Virtual Reality Lab at GRSE aids in the identification of Design/ Construction issues at the Early Design Stage. GRSE has proven design capabilities to integrate systems onboard its platforms to meet its customers’ specific needs.

The Nilgiri-class frigate or Project 17A is a follow-on of the Project 17 Shivalik-class frigate for the Indian Navy. A total of seven ships will be built at Mazagon Dock and GRSE. The ships have been named after the first major warships to be built in India, which were named after hill ranges in India. The first Ship construction started in 2017, and the first Ship is expected to be delivered by 2022. The anticipated cost for each vessel is above $561 million, and the whole deal is expected to be worth more than S$7.1 billion in 2019.

The Nilgiri-class frigates are built based on a stealth design with a covered mooring deck, and the number of antennae on the Ship will be reduced by using EL/M-2248 MF-STAR AESA radar. The P17A will also feature better roll stabilization and a discreet visual profile. The weapon platform in the P17A ships is compact and armed with 32 Barak 8 and 8 BrahMos missiles.£

The Project 17A frigate is also armed with one Oto Melara 127 mm main gun, unlike the Indian Navy’s existing fleet of ships that use 76 mm and 100 mm guns.

The Nilgiri-class frigate powered by two General Electric LM2500 gas turbines and two MAN manufactured diesel engines. This will help the frigate achieve a top speed of 28 knots and a range of 5,500 nautical miles at a speed of 10-15 knots.

By admin1 day ago15 views

By admin2 days ago24 views