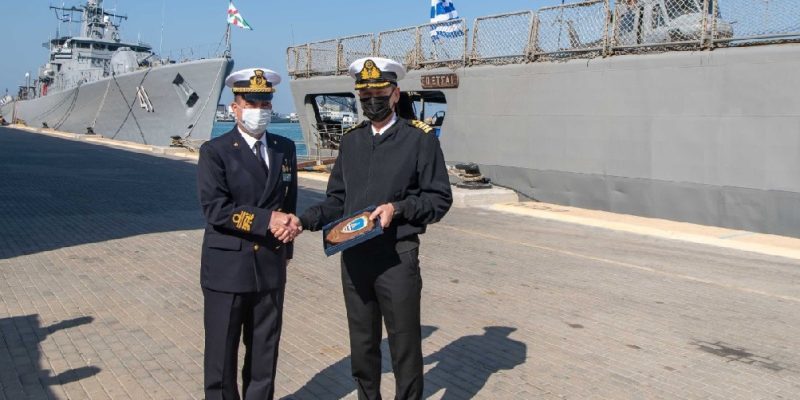 Hellenic Navy frigate HS Spetsai and Bulgarian Navy frigate Drazki paid a visit to Haifa during their focused patrols in the Eastern Mediterranean Sea. For the fourth consecutive year, NATO’s Operation Sea Guardian (OSG) exercises with the Israeli Navy to develop interoperability and to reinforce its cooperation around maritime security.

Simultaneously, a MARCOM delegation led by Italian Navy Rear Admiral Francesco Milazzo, Chief of Staff of Allied Maritime Command met with the Deputy Commander in Chief and Chief of Staff of the Israeli Navy, Rear Admiral Guy Goldfarb, and his staff. Both delegations had the opportunity to assess the cooperation between NATO and the Israeli Navy, analyzing the good work being done and planning for future cooperation opportunities.

This visit has contributed for MARCOM to cement our partnership, fulfilling one of the main tasks of OSG: Capacity Building. Capacity Building, better said, Capacity Development, is a two-way road.” said Milazzo. “MARCOM and the OSG task group learn a great deal in its interactions with the Israeli Navy, both look for better interoperability given their broad experience in maritime security operations”.

Israel has been an important partner to NATO for more than 20 years, as well as an active member of NATO’s Mediterranean Dialogue. The cooperation between NATO and partners like Israel is pivotal to increasing the maritime security in the Eastern Mediterranean Sea and to assure the international community of preserving the stability in this region.

“The partnership between the Israeli Navy and NATO continues to grow stronger. The Israeli Navy is thrilled to host MARCOM’s Chief of Staff, Rear Admiral Francesco Milazzo in Israel, and to conduct a joint OSG PASSEX, which holds great strategic importance to the Israeli Navy and its regional interoperability capabilities” said Goldfarb. “This cooperation consistently demonstrates that the Israeli Navy, together with its partners, will continue to combat the threat of maritime terrorism and maintain security in the Mediterranean Sea”.

Before and after the port visit to Haifa, the NATO task group planned and executed two OSG passage exercises (PASSEX) of increasing complexity, with the Israeli Navy. These exercises enabled to practice of several maneuvers and procedures at sea linked to the interoperability in the conduction of maritime security operations.

During the second iteration, a scenario involving simulated life-threatening accidents with crew aboard NATO ships triggered an urgent medical evacuation to a nearby hospital. This serial enabled to exercise of maritime medical support in the Eastern region of the Mediterranean Sea.

“These drills were a great opportunity to take further on our interoperability skills. We have trained several aspects like communications in support of Maritime Situational Awareness (MSA), helicopter operations, fleet maneuvering and medical assistance at sea” said Captain Panagiotis Karavas, NATO task group commander. “These two exercises enabled NATO and Israeli navies to further develop our cooperation striving to maintain maritime security in the Eastern Mediterranean”.

Check out Naval Library App to find out more about the specifications of the Israeli Navy assets.

By admin23 hours ago24 views

By admin23 hours ago22 views

By admin3 days ago37 views

By admin4 days ago42 views

By admin4 days ago32 views

By admin5 days ago37 views