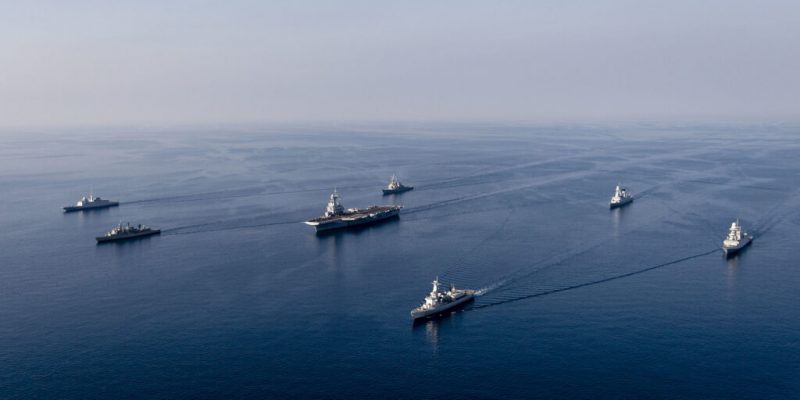 The Arleigh Burke-class guided-missile destroyer USS Donald Cook (DDG 75) is providing multi-warfare defense to the Charles de Gaulle Carrier Strike Group (CDG CSG) in the Mediterranean in support of NATO Exercise Dynamic Manta and other operations, demonstrating our mutual commitment to stability and security throughout the European region, Feb. 03, 2021, the U.S. Navy 6th Fleet announced with a press release.

CDG CSG took tactical control of USS Donald Cook due to integration and interoperability between the U.S. Navy and the French Navy. The combined forces from Belgium, Greece, France, and the United States will support NATO and European operations in the Mediterranean.

“The participation of an American escort ship into the French carrier strike group illustrates the excellent level of cooperation between our two navies, long-time allies.” said French Admiral Marc Aussedat, commander of Charles de Gaulle Carrier Strike Group (CDG CSG) TF473 “The crew of Donald Cook swiftly demonstrated remarkable commitment and great skills. France and the United States, the only nations having catapult and recovery nuclear aircraft carriers, take advantage of each exchange to consolidate their high-end interoperability. These opportunities directly contribute to strengthening our capacity to fight alongside.”

The high level of interoperability and trust between France and the U.S. has allowed seamless operations to be conducted with Charles de Gaulle and Donald Cook.

“It is a wonderful opportunity and a privilege to provide support to the Charles de Gaulle Strike Group,” said Cmdr. Matthew Curnen, commanding officer of Donald Cook. “Working alongside NATO Allies in the Mediterranean is critical to keeping the peace and security that Europe has enjoyed for 70 plus years. We are excited for the opportunity to be a part of the strike group and look forward to learning a lot.”

In recent history, U.S. Navy has worked side-by-side with the French Navy throughout the European and African theater of operation. To mention just a few, in 2016, USS Ross (DDG 71) operated with CDG as part of Combined Task Force 473 in the Mediterranean. In April 2018, France, the U.K, and the U.S. conducted strikes into Syria in response to the Syrian regime’s use of chemical weapons against its people. In 2020, Ross operated with CDG in the eastern Mediterranean in the frame of Operation Chammal, Inherent Resolve, and the fight against ISIS.

U.S. Sixth Fleet assets routinely exercise and operate with our French and NATO counterparts throughout the region. Exercises like Formidable Shield in the North Atlantic, Baltic Operations (BALTOPS), Sea Breeze in the Black Sea, and Obangame Express in the Gulf of Guinea demonstrate and further enhance our combined capability and capacity in the areas of land, sea and air.

Providing support from this region allows the U.S. and our NATO allies and regional partners to demonstrate our shared commitment to the area by giving multi-mission capable platforms with the strike, ballistic missile defense, surveillance, and reconnaissance capabilities.

France is one of the U.S.’s oldest allies, dating back to 1781 to support the U.S. Revolutionary War. This strong bond between our two nations reinforced our relationship and tested our joint combat skills during World Wars. Today, these two navies continue in that great tradition of an exceptional partnership.

USS Donald Cook is one of four U.S. Navy destroyers based in Rota, Spain, and assigned to Commander, Task Force 65, supporting NATO’s Integrated Air Missile Defense architecture. These Forward-Deployed Naval Forces-Europe ships have the flexibility to operate throughout Europe and Africa’s waters, from the Cape of Good Hope to the Arctic Circle, demonstrating their mastery of the maritime domain.

USS Donald Cook (DDG 75) is a multi-mission destroyer designed to defend against and, if required, destroy her enemies on the ocean’s surface, over land, in the sky, under the waves, and even in space.

USS Donald Cook is equipped with one of the most advanced naval weapons systems in the world. Aegis, a computerized, quick reaction air and ballistic missile defense system, provides extraordinary capabilities against attacking aircraft and missiles. The heart of the Aegis system is the SPY radar that automatically detects and tracks virtually everything in the air allowing Donald Cook to identify, evaluate, and engage the enemy with incredible firepower and accuracy.

USS Donald Cook also has one of the most advanced underwater surveillance systems available today and the capability to land helicopters that can fly out to locate submarines or ships.

By OTC16 hours ago5 views