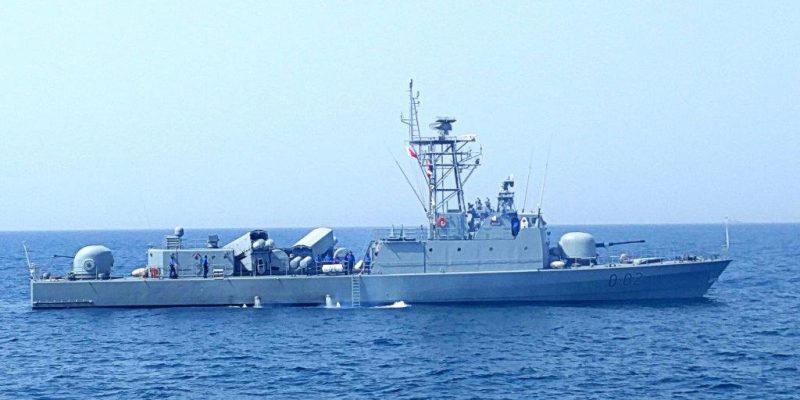 Qatar’s defense budget has tripled since 2014. During this time period, 40 billion dollars worth of arms supply contracts were negotiated with the USA, France, England, Italy, and Turkey. The most notable of these contracts was the procurement of a Landing Helicopter Dock (LPD) ship for the Qatari Emiri Navy. For a country with an area of 11,500 square kilometers and a population of three million that does not aspire to be a regional power, such a ship supply is a matter worth examining.

The History of The Qatari Emiri Navy

When Qatar gained independence from the United Kingdom in 1971, it lacked battleships. Indeed, the Qatari Emiri Navy began operations in the 1980s with the acquisition of three La Combattante-III Class FACs from France. These boats have a length of 56 meters and a displacement of 425 tons. Two 76 mm and two 30 mm guns, four Harpoon Anti-Ship Missiles (SSM), and two torpedo tubes armed the Combattante-III Class Gunboats. Throughout this time period, the overall staff strength was 700.

In the 1990s, the number of personnel surpassed 1800, and the Navy expanded with the acquisition of four Barzan Class Assault Boats from England. These ships are 62 meters in length and have a displacement of 530 tons. They are armed with a 76mm gun, a 30mm Goalkeeper Close Air Defense System, and an air defense system capable of firing six Mistral Missiles and eight Exocet Block-3 Guided Missiles SSMs. With their armaments and systems, we may say that these ships are still capable in today’s conditions.

Qatar purchased 70 patrol boats in the 2010s to safeguard its territorial waterways and oil fields. Following the events in the Middle East and Gulf region in 2010, Qatar altered its security approach. Qatar has opted to expand its Navy further in line with the new security strategy. Agreements with Turkey and Italy were signed. Yonca-Onuk Shipyard developed and delivered 24 swift patrol boats for Qatar. For the Qatar Coast Guard Command, Ares Shipyard constructed 17 Coast Guard Boats.

Anadolu Shipyard also signed an agreement with Qatar in 2018 for the construction of two training ships with a length of 90 meters and a displacement of 2000 tons, as well as one x 80-meter LCT, two x 40-meter LCM, and one LCVP. After 30 months of construction, the first of the training ships were completed and delivered in August of this year. AL DOHA, with the Qatari flag flying, is the largest ship ever built in Turkey for a foreign country. All ships ordered are scheduled to be delivered in 2023.

Along with the ship supplies stated above, Damen Shipyard is now building six rapid patrol boats and two diving support ships for the Qatari Emiri Navy. By 2024, these ships are expected to join the Navy.

Turning Point of Naval Strategy in 2017

One may claim that 2017 marked a pivotal point in the Qatari Emiri Navy’s history. The escalation of tensions with other Gulf states and their consequent suspension of relations with Qatar was a turning point for Qatar. Qatar has pushed the button to establish a naval force capable of not only defending its own territorial waters and oil rigs but also providing deterrence throughout the area. In the same year, Qatar inked a contract worth around $ 6 billion with Italian Fincantieri for the building of four Air Defense Warfare Corvettes, two OPVs, and one LPD.

The construction of the Doha (Al Zubarah) Class Corvettes began in 2018 and three have been launched thus far. They will serve as the naval force’s backbone and provide the navy with regional air defense capacity. By the end of 2022, all four corvettes are expected to be delivered. It is 107 meters in length and has a displacement of 3250 tons.

Ships having a top speed of 28 knots and a range of 3500 nautical miles (6,500 kilometers) are capable of sailing at sea for 21 days without resupply. As a weapon system, it consists of a single 76 mm cannon, sixteen 120 km-range Aster-30 1NT Air Defense Missiles, and eight 200 km-range Aster-30 1NT Air Defense Missiles. They have 16 Vertical Launch System (VLS) equipped with Exocet Block-3 Anti-Ship Missiles, 1 x RAM Air Defense System. They also have a hangar and platform capable of deploying two 30mm Remote Controlled Weapons Systems and a ten-tons NH-90 helicopter. Aster-30 1NT Missiles are also capable of defending against ballistic missiles.

The two OPVs, which are slated to be delivered in 2022 and 2023, stand out for their ability to stay at sea for an extended period of time and low-cost navigation, which is critical for protecting Qatar’s oil and gas installations. The ships, which are also known as light corvettes, are 64 meters in length and have a displacement of 750 tons. Patrol ships, which can reach a top speed of 30 knots, have an economic range of 1,500 nautical miles (2800 kilometers) and can stay at sea for seven days. OPVs are outfitted with one 76 mm gun, four VL-Mica air defense missiles with a range of 20 kilometers, four Exocet Block-3 anti-ship missiles, and two 30 and 12.7 mm remote-controlled weapons.

Qatar has made an order with Italy for one of the Kalat Beni Abbes LPDs that were originally constructed for Algeria. The LPD measures 143 meters in length, 22 meters in width, and has a displacement of 9,000 tons. The ship has a range of 7,000 nautical miles (13,000 kilometers); it is capable of transporting three Mechanized Landing Vehicles (LCM), fifteen heavy combat tanks, 450 infantry, and five helicopters. As a weapon, there are sixteen Aster-30s, one 76 mm cannon, and two 25 mm cannons. The ship will also include an Electronic Attack System in addition to the Electronic Support System.

The Qatari Emiri Navy will be only a few years old in 2025; it will consist of one LPD, four Heavy Corvettes, four OPVs, thirteen FPBs, and more than 110 patrol boats ranging in length from 15 to 40 meters. The Qatari Emiri Navy’s present strength of 4,000 soldiers is expected to increase to 6,000 by 2025.

Check out Naval Library App to find out more about the specifications of the Qatari Emiri Navy assets.

By OTC12 hours ago7 views