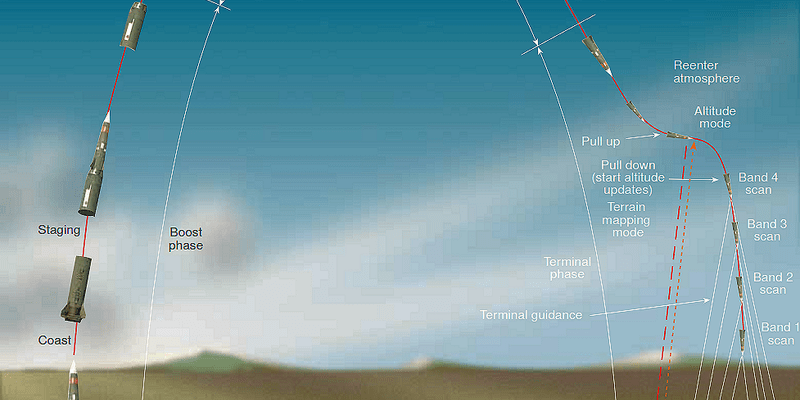 No, for a simple fact that sea-skimming hypersonic missiles don’t exist. A missile can either be flying at hypersonic speed or a sea-skimming profile – it can’t do both at the same time.

This is why ASh-ballistic missiles like DF-21 or Khinzhal with Mach 10 top speed have those ‘pull-up’ and ‘pull-down’ maneuvers in terminal phase – their main objective is to slow down the RV to Mach 5 or bellow in order for the onboard radar seeker to work.

You can see Khinzhal performing similar manoeuvres at terminal phase – while they’re marketed for avoiding Missile Defences, the real objective is to quickly deaccelerate down to Mach 5.

The active guidance eliminates hypersonic speeds at sea-skimming profile – even if flying at those speeds near sea level was feasible.

And coming to feasibility, there’s a huge difference in drag when flying at 14 km compared to when flying at sea-level. Most Russian Mach 3 class AShMs suffer from 25% to 40% loss in speed at low altitude profile (P-700 Granit, Kh-31, P-270 Moskit, etc.)

There’s a reason hypersonic missiles fly at a higher altitude and near a semi-ballistic trajectory.

Irrespective of the top speed, a hypersonic AShM can’t exceed Mach 5 in terminal phase if it were to hit a mobile target and while Zircon can fly in a sea-skimming profile, it certainly can’t do so at hypersonic speeds.

Finally this brings us to the “vulnerability” of surface vessels to hypersonic AShMs. This is Kh-15, a Mach 5 class AShM from the 1980s that made high-altitude dive on the target from 130,000 ft.

That is the kind of threat the US Navy’s Aegis Combat system was designed to deal with and continued to evolve ever since. This is the high-end threat NATO faced during the end of Cold War.

These are the standard targets for SM-2, SM-6 and ESSM. The SM-6 is also effective in terminal ballistic missile defense, being capable of destroying much faster MRBMs with complex RV – similar to the likes of Khinzhal and DF-21.

Even a Mach 3 class AShMs present a significant threat, and something nobody would like to face.

This is not to undermine the threat of hypersonic AShMs. Even a Mach 3 class AShMs present a significant threat, and something nobody would like to face. However, supersonic AShMs have always been at a disadvantage when it comes to the element of ‘Surprise’ and discriminating real targets from decoys.

This is because supersonic AShMs are 2–3 times the size of their subsonic counterpart or in other words, have a much bigger RCS and IR signature – making them more easily detectable even in a sea-skimming profile compared to subsonic AShMs. This reduces the element of surprise which have been a critical factor in Naval combat. Speed also dramatically reduces the response time to discriminate real target from decoys.

It only gets worse for hypersonic AShMs. They’ve even higher flight altitude, so can be detected from much longer range and their onboard seeker will have less than half the response time to distinguish the target from decoys – making them much more vulnerable to ECMs and decoys. Lastly, Zircon’s terminal speed will be well within the range of what most point-defense systems are capable of handling.

In real-world, hypersonic AShMs will not be as big of a threat compared to existing supersonic AShMs as the hype suggest. Most Naval vessels today are capable of engaging much faster and more challenging targets than Zircon. Historically, the most lethal AShMs have been those that were detected only at the last moment – not those that could be detected soon after their launch.