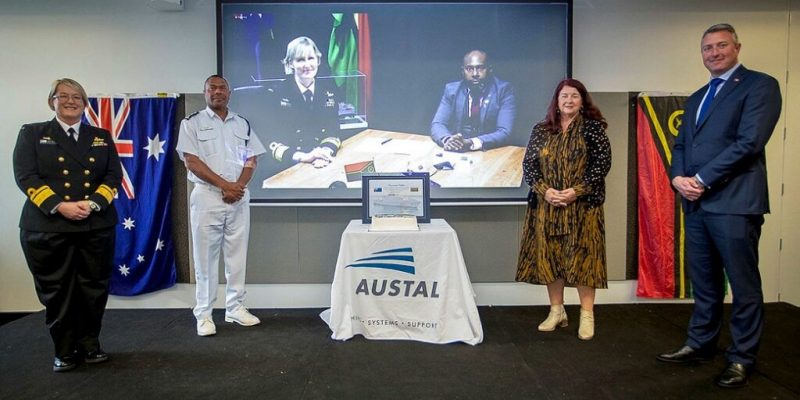 Austal Australia has delivered the 12th Guardian-class Patrol Boat (GCPB) to the Australian Department of Defence, Austal announced on 2 August.

The vessel, the RVS Takuare, was then gifted by the Australian Government to the Government of the Republic of Vanuatu at a certificate signing ceremony held at the Australian Marine Complex, in Henderson, Western Australia.

“Takuare is the 12th Guardian-class Patrol Boat Austal Australia has delivered in just over 30 months, and the fourth Guardian we have delivered this year, alone,” Mr Gregg said.

“The Pacific Patrol Boat Replacement Project continues to impress our customers, stakeholders and end-users, the Pacific Island nations, with the tremendous efficiency with which we are completing these vessels.

“With effective collaboration between the Department of Defence, Austal Australia and our Australian Industry Capability (AIC) partners – our trusted supply chain – we are maintaining a delivery schedule of one vessel, on average, every three months. That is an outstanding track record, of which the Australian defence industry should be proud.

“Our warmest congratulations go to the President of Vanuatu, His Excellency Obed Moses Tallis; Prime Minister the Honourable Bob Loughman Weibur; Commissioner of Vanuatu Police Force Colonel Robson Iavro; Commanding Officer of the RVS Takuare, Chief Inspector Dicky Obed, Vanuatu Police Maritime Wing and his crew, and the people of the Republic of Vanuatu on the handover of this outstanding new patrol boat.”

Faster, with improved seakeeping, better amenities and an enhanced mission capability – including an integrated RHIB stern launch and recovery system – the Guardian-class Patrol Boats provide the Vanuatu Police Maritime Wing with a much improved naval asset to carry out border patrols, regional policing, search and rescue, and many other operations domestically and internationally.

The Pacific Patrol Boat Replacement (PPB-R) Project was awarded to Austal in May 2016, with an additional contract option awarded in April 2018, taking the program to 21 vessels, valued at more than A$335 million.
Twelve Pacific Island nations including Papua New Guinea, Fiji, the Federated States of Micronesia, Tonga, Solomon Islands, Cook Islands, Kiribati, Marshall Islands, Palau, Samoa, Tuvalu, Vanuatu and Timor Leste will receive the vessels through to 2023.

The 39.5-metre steel monohull patrol boat – designed, constructed and sustained by Austal Australia – is based on a proven design platform that has included the 38-metre Bay-class, 56-metre Armidale-class and 58-metre Cape-class patrol boats that are in service with the Australian Border Force and Royal Australian Navy.

This ASX announcement has been approved and authorised for release by Paddy Gregg, Austal Limited’s Chief Executive Officer.

Check out Naval Library App to learn more about the specifications of the Guardian-class patrol boats.