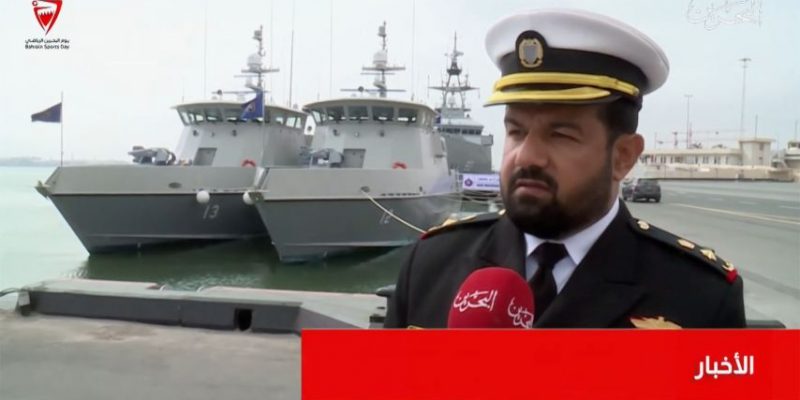 The ceremony was attended by Commander-in-Chief of the Bahrain Defence Force (BDF), Field Marshal Shaikh Khalifa bin Ahmed Al Khalifa in the presence of senior state officials and ministers.

The BNF vessels that were officially commissioned:

On 7 August 2020 it was announced in a ceremony held at the HMNB Portsmouth Naval Base in the UK, that Clyde had been transferred to the Royal Bahrain Naval Force, with the ship renamed as RBNS Al-Zubara.

The new type made by the US company Swiftships are 35 meter Fast Patrol Boats, each equipped with one MK38 Mod 3 25mm gun weapon system and one SeaFLIR 380 HD Forward Looking Infra-Red (FLIR) device. The total estimated cost of the boats is $60.25 million.

The national anthem was played, and then the commander-in-chief inspected the Guard of Honour, whose members lined up to salute him.

Then, some holy Quran verses were recited, and RBNF Commander delivered a statement on the occasion.

The commander-in-chief was presented with a commemorative gift from RBNF Commander.

After that, the BDF Commander-in-Chief inaugurated the “RBNS Al-Zubara” patrol warship and raised the national flag on it. The national flag was also raised on the other vessels.

Field Marshal Shaikh Khalifa bin Ahmed Al Khalifa then toured the RBNS Al-Zubara’s sections, and was informed about its sections, as well as capability and sustainability, as it uses advanced combat weapons and copes with the latest developments in the field of modern warships. He also toured the other boats.