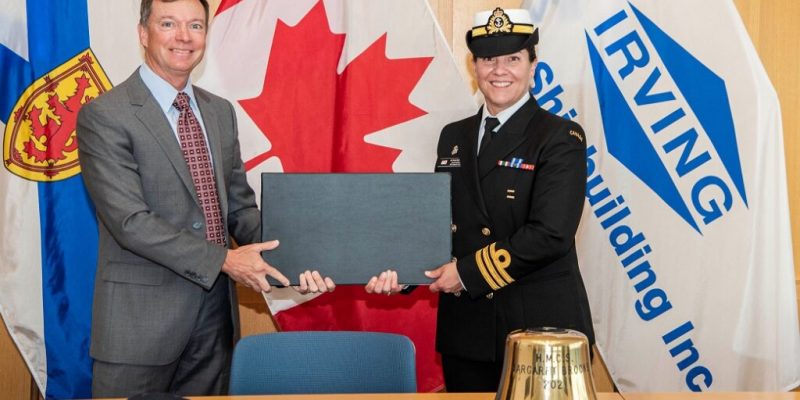 The delivery is completed just a few weeks after the commissioning of HMCS Harry DeWolf, the lead ship of the class.

“Today we celebrate another important milestone for the National Shipbuilding Strategy and the Royal Canadian Navy with the arrival of its second new Arctic and Offshore Patrol Ship, the future HMCS Margaret Brooke. The delivery of this ship is a testament to the hard work and perseverance of Canadian shipbuilders despite the ongoing challenges of the COVID-19 pandemic and will help to ensure our Navy is equipped with the modern ships it needs to assert Arctic sovereignty for years to come. Bravo Zulu to everyone who has helped make this delivery a success.” Harjit S. Sajjan, Canadian Minister of Defence said during the ceremony.

Built by Irving Shipbuilding Inc. of Halifax, Nova Scotia, this is the second of six new patrol ships being built for the RCN. Designed with a thick and robust hull, the ships will be able to operate in up to 120 cm of first-year sea ice, and will provide the Canadian Armed Forces with enhanced access and capability in the Arctic.

With their considerable space to transport cargo and the capacity to embark a Cyclone helicopter, small vehicles, and deployable boats, the Harry DeWolf-class ships have the versatility to support a full range of RCN operations, while also contributing to global peace and security across the world in coordination with our allies and partners.

The future HMCS Margaret Brooke will remain docked at Jetty NJ at the CFB Halifax Dockyard while post-acceptance work and final ship preparation work are completed. A naming ceremony for the ship is expected to be held later in 2021, with a formal commissioning ceremony expected in fall 2022 as the ship officially enters into active RCN service. Construction of the following three ships in this class is ongoing, with the construction of the sixth ship expected to begin in 2022.

The second AOPS, the future HMCS Margaret Brooke, will be named in honour of the Royal Canadian Navy Nursing Sister Lieutenant-Commander Margaret, Martha Brooke, who was decorated for gallantry during the Second World War. The ship’s designation is AOPV 431.

Following delivery to the Government of Canada, the ship will undergo final preparations and outfitting, as well as additional tests and trials to confirm final elements of the design. This will occur simultaneously with operational readiness activities and training for the future crew of HMCS Margaret Brooke.