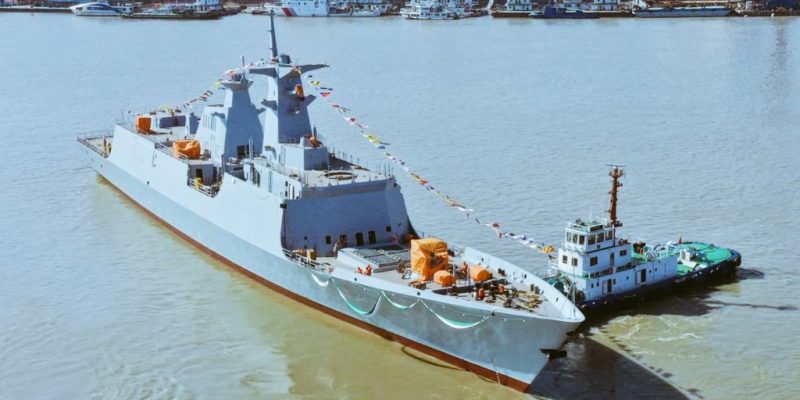 The spokesman also mentioned the possible benefits of the frigate to the Pakistan Navy, saying “The induction of these warships will strengthen PN maritime defence and deterrence capabilities. The ship will also contribute to maintaining peace and stability in the region.”

Chinese Hudong Zhonghua Shipyard laid the keel of this frigate in May 2021. The shipyard launched the vessel just 4 months after keel-laying.

The first-in-class Frigate was launched in August 2020, with the second Frigate following in January 2021 at the Chinese Hudong Zhonghua Shipyard in Shanghai. The successful launch of the series’ third ship demonstrates the depth of Sino-Pak defence and diplomatic ties.

This frigate is the third of four vessels ordered by Pakistan. Pakistan Navy has contracted the construction of Type 054 AP Frigates from China under a contract signed in 2017.

The Type 054A/P displaces at 4,200 tons. It was designed as a multi-mission platform capable of anti-ship warfare (AShW), anti-submarine warfare (ASW) and anti-air warfare (AAW). It currently serves as the mainstay frigate of China’s People’s Liberation Army Navy (PLAN), which operates 30 Type 054As.

The ships Pakistan is getting are similar to their PLAN counterparts, except they make use of export-grade versions of key subsystems and weapons. Pakistan’s Type 054A/Ps will house a 32-cell vertical launch system (VLS) carrying the LY-80N medium-range surface-to-air missile (SAM), two triple ASW torpedo tubes, and a possibly different AShW capability.

Official illustrations of the Type 054A/P in 2018 showed either a two-by-three or two-by-two cell suite for anti-ship cruising missiles (ASCM). This modification could be for compatibility with Pakistan’s locally manufactured ‘Harbah’ dual-ASCM/land-attack cruise missiles (LACM). If derived from the Babur LACM (which is likely), the Harbah ASCM/LACM should have a range of 450 km to 700 km-plus.

Check out Naval Library App to learn more about the specifications of Type 054 A/P Class Frigates.