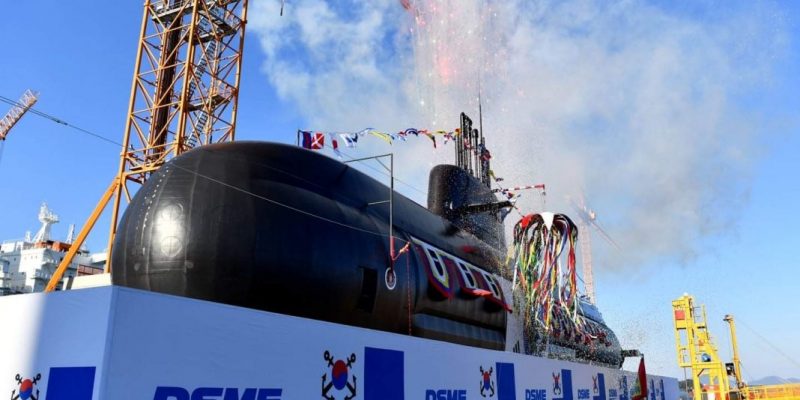 The boat will be commissioned in 2022. The first submarine of this class, ROKS Dosan Ahn Chang-ho, is currently undergoing sea trials.

The South Korean Ministry of Defense in December 2012 awarded DSME $1.56 billion to build two large conventional/diesel-electric (SSK) KSS III Batch-I submarines. In November 2016, Hyundai Heavy Industries (HII) received a contract to build another boat of the first batch. Delivery of all three boats is scheduled for the end of 2023.

Construction of the KSS-III Batch II project for Republic of Korea (ROK) Navy was approved in May 2019. Batch-II vessels will consist of 3 hulls with some design changes. Daewoo Shipbuilding and Marine Engineering Co. was chosen in May 2016 to design and construct a KSS III Batch-II hull.

Batch-III will consists in the three remaining hulls with more advanced technologies.

KSS-III Batch 1 submarine has a displacement of over 3000 tons, has a length of 83.5 meters, a width of 9.6 meters, and a draft of 7.7 meters. Its maximum submerged speed is 20 knots, and the cruising range at economic speed is 10,000 nautical miles. The crew consists of 50 sailors. The vessel is fitted with eight 533-mm torpedo tubes as well as 6x VLS (vertical launch system) tubes to accommodate a future cruise missile (Cheon Ryong with a range of 1,500 Km) in development by LIG Nex1 while the launchers would be provided by Doosan. Spanish INDRA will provide its electronic defence system (ESM) PEGASO, U.K.’s Babcock would design and manufacture the Weapon Handling Systems, French Safran will supply optronic masts for the class and ECA Group the steering consoles. The ship’s combat management system will be provided by Hanwha while flank array sonars will be supplied by LIG Nex1.

Another Credit Card Stealer That Pretends to Be Sucuri

By OTC5 days ago82 views