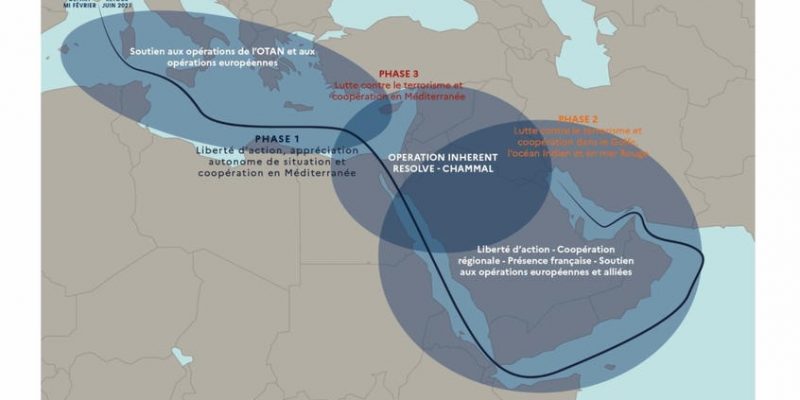 France aims to remain a global maritime-air power with an aircraft carrier that provides air power projection. “It’s a combat vessel, a symbol of power, testimony to our capacity for action,” French Armed Forces Minister Florence Parly said on Twitter. “It’s the voice of France on all the globe’s waters. France would like to preserve its strategic autonomy.” Another mission of the aircraft carrier is to offer the option to launch nuclear strikes from the sea.

The French Ministry of Defense announced that Charles de Gaulle (R91) Aircraft Carrier Task Group (CST) would deploy during the first half of this year in the Eastern Mediterranean, Red Sea, North Arabian Gulf, possibly the Persian Gulf as well as the Indian Ocean. The CTG will set sail from Toulon during the week of 15 to 21 February as a part of the Clemenceau 2021 mission. The CTG deployment is its first mission undertaken since the beginning of 2020 when nearly two-thirds of its crew were infected with the emerging coronavirus.

The French Minister of Armed Forces said:” “In the first half of 2021, the naval aviation group will be deployed in the Mediterranean and the Indian Ocean. This commitment demonstrates, if necessary, our determination to fight terrorism permanently and unconditionally. This deployment will particularly contribute to the fight against terrorism in the Levant where there is a resurgence of Daesh.” In the mission named Clemenceau 21, the aircraft carrier Charles de Gaulle and its escort operate in the central and then eastern Mediterranean, where they will take part in Operation Chammal/Inherent Resolve combat the terrorist group Daesh. The CTG, which makes up Task Force 473, will then move on to the Red Sea, then take up positions in the northern Indian Ocean and the Persian Gulf.

However, Charles de Gaulle will not push as far as India this year, which will be the case for the amphibious group deployed in the Joan of Arc mission’s framework. Thus, the amphibious helicopter carrier Tonnerre and the frigate Surcouf will participate in the Franco-Indian Varuna 21 exercise before continuing their deployment to Asia, within particular two planned passages in the South China Sea.

The Clemenceau 21 mission, which will end with the CTS’s return to Toulon in June, will see the Charles de Gaulle and its onboard air group (Rafale Marine, Hawkeye, helicopters) escorted by the air defense frigate Chevalier Paul and the multi-mission frigate Provence, with their logistical support provided by the Var command and supply ship. The CTG will also be supported by a nuclear attack submarine of the Rubis type and an Atlantique 2.

Besides, French and foreign units will be temporarily present in the areas crossed. Three allied ships will be integrated into the French CTG from the start of the mission: the American destroyer USS Porter, the Belgian frigate Leopold I, and the Greek frigate Hydra. The CTG will also include a French mine warfare group during the Persian Gulf period.

France assesses CTG as one of the main elements of its security and foreign policy. Deployment of this enormous power is also a diplomatic tool. Charles de Gaulle’s mission to the eastern Mediterranean will take place against a backdrop of tension with Turkey, mainly due to disagreements over Syria and Libya and the conflict between Azerbaijan and Armenia Nagorno-Karabakh, but also precisely in the Mediterranean around the disputed maritime areas.

The expectation that the EU and the US can act together against security problems during the Biden period may have been determinant in the assignment of the CTG to the Persian Gulf.

It seems that aircraft carriers escorted by several different platforms will continue to be the symbol of power at sea, even if developing missile technology poses a significant threat.