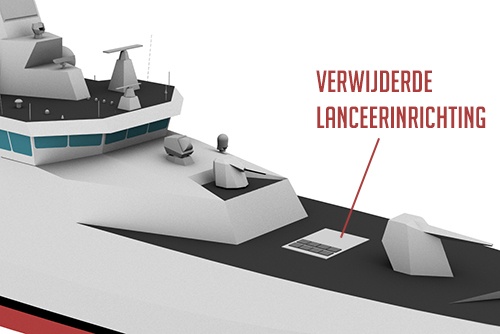 According to the Belgian Defense Minister Ludivine Dedonder’s statement last week, the future frigates of Belgium will be constructed under the Anti-Submarine Warfare Frigate program Netherlands’ partnership, will be fitted with 8-cell MK 41 instead of 16.

The minister has stated that a “number of compromises” had been decided and that these choices “had no impact on the good relations within the cooperation between the Netherlands and Belgium,” the Royal Netherlands Navy shared.

Dedonder cited only one example of a cut in the Belgian order: the vertical missile launcher. The frigates in the front part of the ship (‘the barge’) will have various weapon systems: behind the 76mm Sovraponte gun, there is room for two Mk41 vertical launchers. An Mk41 consists of 8 cells for missiles such as ESSM, SM-2, SM-3, etc. These are expected to be primarily intended for ESSM Block 2 missiles against medium-range air targets. Two of these Mk41s thus give the ship 16 launch cells. And because the ESSM missiles come in a pack of four in one cell, there is room for up to 64 ESSM missiles.

“For Belgium, one of the two launch systems has been designated as provisions for”, Dedonder added. Therefore, the Belgian ships will not have two but one MK41 launchers, provisions will be made for the second, but it will not be purchased and not installed. Only in the event of “a possible changing future threat will the provisions for Belgium systems be further elaborated in the future.” Belgium chose to stay within the budget laid down in a Memorandum of Understanding (MoU) between the Netherlands and Belgium.

The Anti-Submarine Warfare Frigate (ASWF) is a project of the Royal Netherlands Navy and Belgian Navy to replace the existing Multipurpose- or M-frigates. The project shows similarities to the British Global Combat Ship (also formerly named FSC program), but development is fully separate. Damen Schelde Naval Shipbuilding is the builder.

The Royal Netherlands Navy searched for European partners to build the ships with and cut costs. In January 2017, they reached an agreement with the Belgian Marine Component to build four frigates together. This number could be adjusted later on during the next phases of the acquisition process. The four ships’ costs are currently estimated at 1.50-2.50 billion euros for the two Dutch frigates and 1 billion euros for the two Belgian frigates.