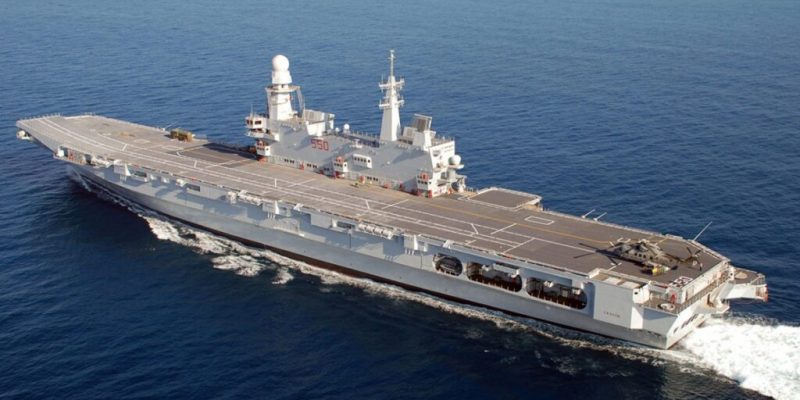 The Italian Navy flagship, the aircraft carrier ITS Cavour (CVH 550), arrived at Naval Station Norfolk on Feb 13 for a series of operations alongside U.S. military assets to attain the Italian Navy’s “Ready for Operations” certification to safely land and launch F-35B aircraft, the U.S. Navy announced with a press release.

While in the Western Atlantic, Cavour will be embarked by an F-35 Joint Program Office (JPO) test team to conduct sea trials, a series of tests and functional activities to create a safe flight operating envelope for the short takeoff and vertical landing (STOVL) variant of the 5th generation aircraft aboard the recently upgraded ship.

This carrier-based flight test and other actions with U.S. 2nd Fleet ships and aircraft improve interoperability and strengthen the relationship between the two NATO Allies.

Upon arriving in Norfolk, ITS Cavour was hosted by USS John. C. Stennis (CVN 74). Stennis is coordinating and providing all pier services required by Cavour, to include refueling, diving operations, equipment and personnel on load, security, and contingency medical functions.

ITS Cavour has completed a 16-months complex overhaul and modernisation in the dry dock “Edgardo Ferrati” that will allow the vessel to embark the fifth-generation F-35B on May 2020.

The Cavour has a maximum displacement of 30,000 tonnes, maximum speed of 29+ knots with a range of 7,000 nautical miles (12,964 kilometres) at a speed of 16 knots. Cavour is designed to accommodate a combined fleet of 12 support helicopters and 10 AV-8B Harrier IIs or Lockheed Martin F-35Bs in the hangar with an additional six parked on the flight deck.

Additionally, Cavour combines the aircraft carrier capability with the capacity to serve as a traditional LHD with accommodation for a maximum capacity for 450 amphibious infantry.