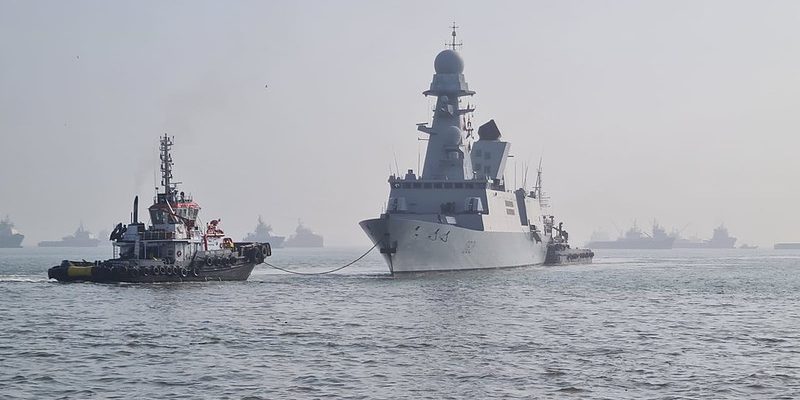 To demonstrate the strength of Indo-French naval cooperation in the Indo-Pacific, the French air defense destroyer Chevalier Paul called at Mumbai naval port after taking part in a large-scale air and naval joint exercise off the coast of Maharashtra.

FNS Chevalier Paul, a Horizon-class air defense destroyer is currently deployed in the Indian Ocean as part of France’s permanent military presence in the region. As part of this deployment, it is making a port call at Mumbai on November 18-19, and later at Kochi, marking Indo-French naval cooperation and the central role that India plays in France’s naval presence and strategy in the Indian Ocean.

Ahead of its port call in Mumbai, the Chevalier Paul took part in a large-scale Indo-French air and naval exercise on 16-17 November off the coast of Maharashtra. This exercise brought together 16 Indian and French aircraft, including French Mirage 2000 and Rafale jets from the Abu Dhabi airbase, as well as the Chevalier Paul destroyer. It aimed to simulate a highly complex air attack and defence scenario. It pitted two teams – each comprising both French and Indian pilots – against each other, in a demonstration of the high level of interoperability achieved by the French and Indian forces.

The Horizon-class air defence destroyer, Chevalier Paul, was commissioned by the French Navy in 2011. A versatile ship specializing in air defence and control, its main missions are the escort and protection of a carrier strike group or of an amphibious task force, but it can be employed for a variety of other tasks. It carries a crew of 215, 15% of whom are women.

Its main weapons system, the PAAMS (Principal Anti Air Missile System) is made of a 3D detection capability combined with EMPAR fire control radar and ASTER 30 anti-air missiles, ensuring a 360° protection at a distance of 100 kilometers against aircraft and 30 kilometres against anti-ship missiles. EXOCET anti-ship missiles, anti-submarine torpedoes and several guns are also embarked on the destroyer. FNS Chevalier Paul can also carry a multi-role military helicopter.

Check out Naval Library App to find out more about the specifications of the Horizon Class Destroyers.

By OTC11 hours ago6 views