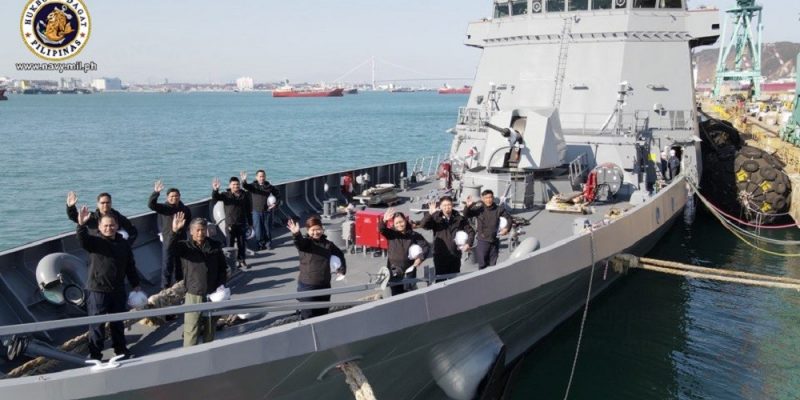 According to a statement released by the Philippine Navy on January 29, a joint Department of National Defense (DND) and Philippine Navy (PN) inspection team has approved for delivery and acceptance of the future BRP Antonio Luna (FF151), the country’s 2nd new-built missile frigate. The 1st frigate, BRP Jose Rizal (FF150), was delivered and commissioned in July 2020.

After the conduct of harbor/sea trials and actual ship inspection at the contractor’s facility in Ulsan, South Korea, on January 25 to 29, 2021, the head of the joint DND-PN inspection team and Chief, DND Defense Procurement Service, Director Leodegario Dela Paz, has found the contractor, Hyundai Heavy Industries (HHI), compliant with all its contractual deliverables and obligations.

“Moreover, we are happy to report that the HHI has provided additional equipment and sustainment items, more training activities, and ship design improvements, which are over and above its contractual obligations. HHIs goodwill gesture has an estimated value of USD 7.4 Million,” added Rear Admiral Carlos.

According to Director Dela Paz, “since FF151 has passed all the performance tests and the contractor has delivered on its contractual obligations, we will recommend to the Secretary of National Defense the delivery and acceptance of FF151.”

The HHI Project Manager Mr. Bokyung Kang said that he is very “honored and happy to see the finale of this PN Frigate Project.” He added that HHI has fully demonstrated its world-class shipbuilding capability and is now looking forward to extending its capacity upgrade partnership with the Philippine Navy thru more ship construction projects such as corvettes and submarines.

Per the agreed timeline, FF151 sets to sail out of Ulsan, Korea, on February 5, 2021, and is expected to arrive in Subic, Philippines, on February 10, 2021. The delivery of FF151 is one(1) month ahead of the contractual delivery date of March 6, 2021. After the mandatory Coronavirus 2019 (COVID-19) RT-PCR tests and quarantine of the crew, the PN will conduct the formal commissioning ceremony of FF151.

Naval News comment: The main aim of the Philippine Navy is to regain some respect from other countries in the region, show the flag and protect their own interests in the South China Sea. Of course, the second missile frigate will boost PN’s capabilities to show presence and boost the capabilities to protect their EEZ. The Philippines plans to spend a significant amount of money to build a 50-ship maritime force, including short-range missile-capable smaller, and faster vessels. This is the only way to survive in such a region with disagreements.

Ultra to provide VDS for the Royal Canadian Navy