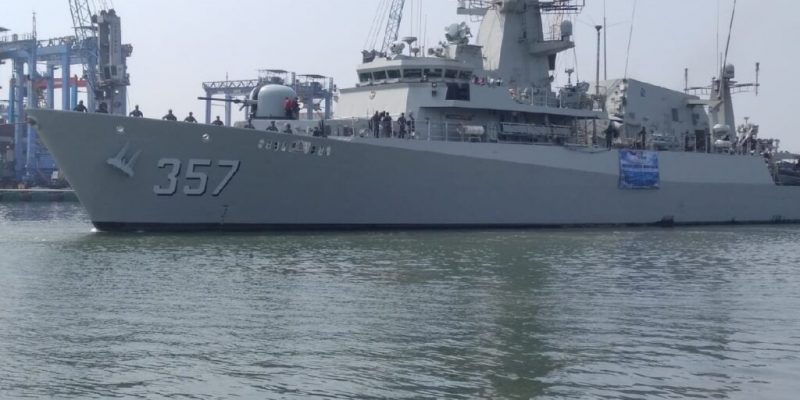 The Indian Naval Ships Shivalik and Kadmatt arrived in Jakarta, Indonesia on 18 September 2021 to take part in the third edition of the Bilateral Exercise ‘Samudra Shakti’ with the Indonesian Navy, which is scheduled to take place from 20 to 22 September 2021 off the coast of Sunda Strait, Indian Navy announced.

The Samudra Shakti exercise aims to fortify bilateral ties, increase mutual understanding, and improve interoperability between the two navies’ maritime operations. Additionally, the exercise will serve as a forum for the exchange of best practices and the development of a common understanding of maritime security operations.

The Indian Navy ships Shivalik and Kadmatt are among the most recent indigenously designed and built multi-role guided missile stealth frigates and anti-submarine corvettes, respectively. They are assigned to the Indian Navy’s Eastern Fleet, which is headquartered in Visakhapatnam and is commanded by the Eastern Naval Command. The Indian Navy’s P8I Long Range Maritime Reconnaissance Aircraft, which is capable of anti-submarine warfare, is also taking part in the exercise. The Indonesian Navy is represented by KRI Bung Tomo, KRI Malahayati, and Maritime Patrol and Reconnaissance Aircraft CN-235.

Exercise ‘Samudra Shakti’ was conceived in 2018 as a bilateral IN-IDN exercise in accordance with India’s Act East Policy. The exercise has grown in complexity over the last two editions and will include complex maritime operations such as Military Interdiction Operations (MIO), Cross Deck Landings, Air Defense serials, Practice Weapon Firings, Replenishment Approaches, and Tactical Manoeuvres.

According to existing policies, the third edition of Exercise Samudra Shakti will be conducted in a COVID-safe environment with the objective of enhancing maritime cooperation between the two navies and forging strong bonds of friendship throughout the Indo Pacific.

Check out Naval Library App to find out the specifications of the Indonesian Navy ships.