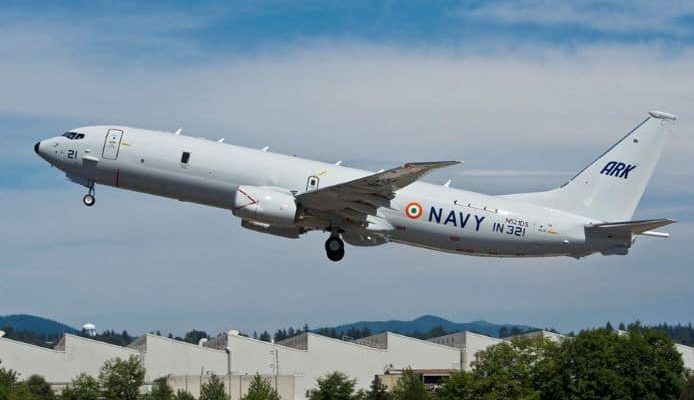 The Indian Navy has received the 10th anti-submarine warfare aircraft P-8I from Boeing, according to a statement issued on Tuesday (July 13, 2021)

The Indian Defence Ministry had first signed a contract for eight P-8I aircraft in 2009. Later, in 2016, it signed a contract for four additional P-8I aircraft. Tenth P-8I is the second of four additional aircraft under the options contract signed by the Ministry of Defence in 2016. The Indian Navy was the first international customer for the P-8, which is also operated by the U.S. Navy, the Royal Australian Air Force, and the United Kingdom’s Royal Air Force. It has also been ordered by the Royal Norwegian Air Force (RNoAF), the Royal New Zealand Air Force (RNZAF), German Navy and the Republic of Korea Navy (ROKN).

The Indian Navy had received the ninth P-8I aircraft in November last year.

The Boeing P-8 Poseidon is an American maritime patrol aircraft developed and produced by Boeing Defense, Space & Security, modified from the 737-800ERX. It was first developed for the United States Navy (USN).

The aircraft armed with what the Boeing has described as the world’s “most advanced” weapon systems and other equipment such as sensors and radars, is used for reconnaissance activities.

The P-8 operates in the anti-submarine warfare (ASW) and anti-surface warfare (ASUW). It is armed with torpedoes, Harpoon anti-ship missiles, and other weapons, can drop and monitor sonobuoys, and can operate in conjunction with other assets, including the Northrop Grumman MQ-4C Triton maritime surveillance unmanned aerial vehicle (UAV).

The P-8A is a long-range anti-submarine and anti-surface warfare aircraft used by the U.S Navy. It’s vital for intelligence gathering, surveillance reconnaissance and search and rescue. Deployed around the world, with 103 aircraft in service and more than 300,000 flight-hours, the P-8’s performance and reliability delivers confidence to customers operating in an uncertain world.

The P-8 is militarized with maritime weapons, a modern open mission system architecture and commercial-like support for affordability. It’s the principal aircraft with the ability to detect and track submarines. The aircraft is modified to include a bomb bay and pylons for weapons. It has two weapons stations on each wing and can carry 129 sonobuoys. The aircraft is also fitted with an in-flight refueling system.

A military derivative of the Boeing 737 Next-Generation airplane, the P-8 combines the most advanced weapon system in the world with the cost advantages of the most popular airliner on the planet. The P-8 shares 86% commonality with the commercial 737NG, providing enormous supply chain economies of scale in production and support.

Check out Naval Library App to learn more about the specifications of P-8 Poseidon Aircraft.