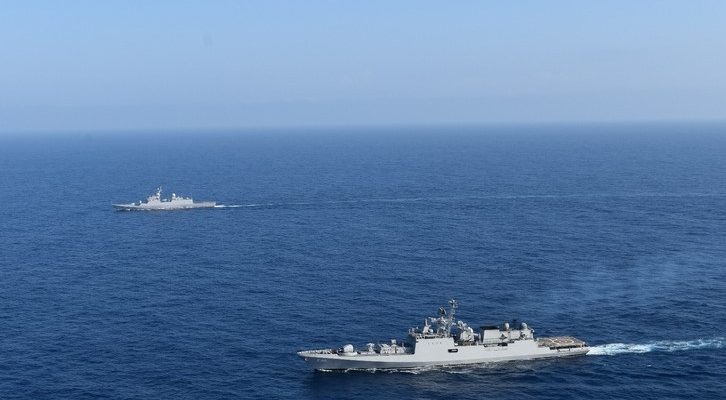 Between 25 and 29 August, the Indian frigate INS Tabar conducted maritime drills with Moroccan and Algerian Navy assets in succession as part of her overseas deployment in the Mediterranean Sea.

On 25 and 26 August 2021, the INS Tabar made a port call in Casablanca, Morocco. On 26 August 2021, the ship departed the port and took part in a Maritime Partnership Exercise off the coast of Casablanca with the Royal Moroccan Navy ship ‘Lieutenant Colonel Arrahman’. Throughout the exercise, evolutions such as communication drills, replenishment at sea procedures, and naval manoeuvres were conducted. The exercise concluded with the customary ‘Steam Past’ between the two ships to bid each other farewell.

On 29 August 2021, INS Tabar participated in a Maritime Partnership Exercise with the Algerian Navy ship ‘Ezzadjer’ following the completion of the drills with Moroccan assets. The historic exercise, which took place off the Algerian coast, included a frontline Algerian warship, the ‘Ezzadjer’.

Diverse activities, including coordinated manoeuvring, communication procedures, and a steam past, were conducted between the Indian and Algerian warships as part of the exercise. The exercise taught the two navies how to operate in unison, improved interoperability, and paved the way for future interaction and collaboration.

Algeria’s naval exercise is critical for India because it is strategically located in the Maghreb region and is one of the largest countries in Africa.

Check out Naval Library App to find out the specifications of the Talwar-class frigates.

The Guide to Targeted-Impact Link Building