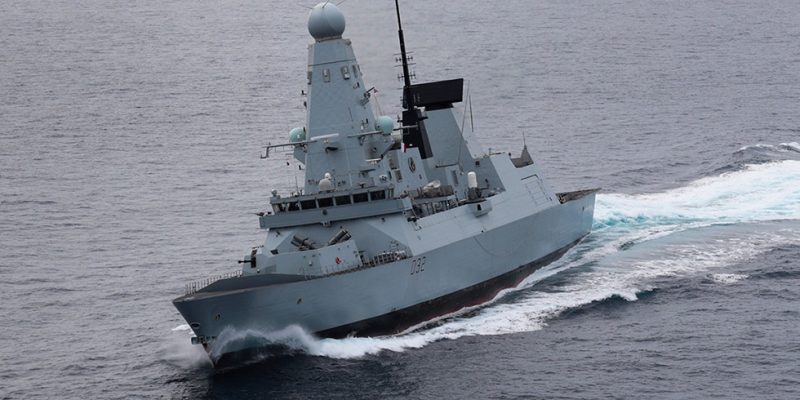 No. There’s no doubt that the Type-45 Destroyers have one of the most advanced Air Defence systems and in certain areas are even better than Burke Class. Like the smaller SAMPSON fire-control radar being placed higher and thus, offering greater radar horizon against sea-skimming missiles – theoretically giving Type-45 slightly better performance against sea-skimming missiles over Burke-class when operating alone.

However, when it comes to Air Defence, today’s Arleigh Burke-class with Aegis Baseline 9 is on a league of its own. The biggest advantage of Burke is that it carries twice the number of interceptors – 96 vs. 48 cells in Type 45. While Tomahawk Land Attack Missiles (TLAMs) may take some of that space, it’s negated by the fact you can quad-pack ESSM (4 in 1 cell). The ESSM is comparable to Aster-15. The second biggest factor is the difference in the engagement envelope of the two. Type 45 has about 120 km engagement range with Aster-30, the Burke on the other hand has near 300–400 km range with SM-6 that have set the record for the longest interception in naval history, twice.

A lot of comparisons about Burke class mention the limitation of using SAMs with semi-active homing from separate illuminators and thus, restricting the number of simultaneous engagements. It’s worth addressing that is no longer the case with SM-6 and ESSM Block II, both of which have active-guidance. Although target illumination still takes place as all the SAMs employ dual-mode seekers to increase pK and the SPY-1D(v) radar can illuminate the target as well. The Burke also have the advantage of having 4 separate arrays for simultaneous 360° coverage – this is especially useful in dealing with multi-directional saturation attacks from supersonic/hypersonic threats.

It’s also important to account that Arleigh Burke Class with Aegis BMD can provide Fleet or Theatre Ballistic Missile Defence as well. While Royal Navy’s Type 45 with SMART-L radar and Aster-30 is potentially capable of dealing with short-range ballistic missiles – the Burke class with Aegis Baseline 9 is optimized to deal with much greater class of ballistic missiles and have been extensively tested over the last decade. As a result, the SPY-1D(v) is much more powerful and Aegis system is exponentially more capable in this area.

Then there’s SM-3, the most tested exo-kinetic interceptor with Block IIa having a range of 2,500 km. The SM-6 has been successfully tested against ‘complex’ MRBMs(Medium-range ballistic missile) and SM-3 has been routinely tested against IRBMs(Intermediate-range ballistic missile), with results that lead to US Navy deciding to test Block IIA against an ICBM this year.

The US Navy’s NIFC-CA (Navy Integrated Fire Control-Counter Air) makes over-the-horizon targeting possible. The SM-6 have successfully engaged targets solely relying on the targeting data from E-2D and F-35. This allows taking complete advantage of the superior range as well as overcome the limitation of a Destroyer’s radar horizon.

A Type 45 can possibly engage over the horizon targets using a targeting solution from another Type 45 but it’s not the same as using an airborne platform/AWACS data.

The Flight III Burke will be even more capable with SPY-6, a GaN AESA radar that has 3 times the range of SPY-1D(v), along with a significant increase in the number of targets tracked.

This is not to underestimate Type 45’s anti-air capability. With Aster-15/30, it’s highly capable of dealing with Mach 3 class sea-skimming missiles and will be quite effective against hypersonic or short-range ballistic missiles. The Burke class’s Aegis system was designed to provide Fleet Air Defence to the super Carriers – long engagement envelope, twice the number of interceptors, and covering a much wider range of threats is what puts Burke class with Aegis Baseline 9 on a league of its own.

Check out Naval Library to find out all details (including sensor and weapon specs) Arleigh Burke and Type 45 Class Destroyers.