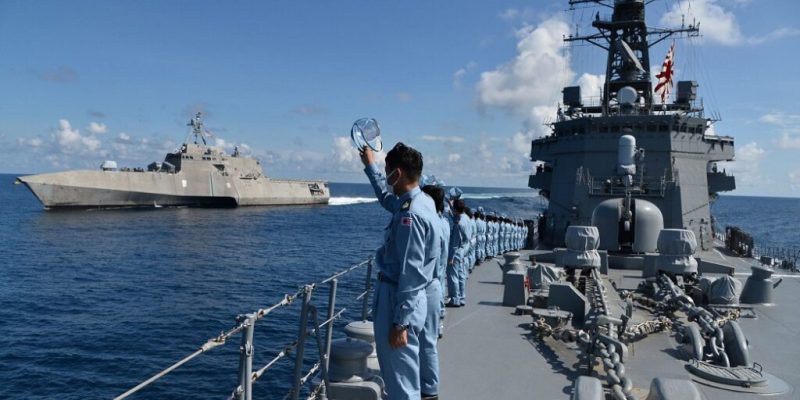 The Murasame-class destroyer JS Yudachi (DD 103) of the Japan Maritime Self-Defense Force (JMSDF) and the Independence-variant littoral combat ship USS Jackson (LCS 6) of the US Navy operated bilaterally in the South China Sea.

While transiting, the ships formed a Surface Action Group (SAG) and practiced a variety of surface warfare tactics such as flight operations, communications drills, and coordinated tactical maneuvering, all with the goal of improving interoperability and allowing the ships to practice bilateral tactics in close proximity to one another.

“Meeting our Japanese allies in the South China Sea allowed both of our teams to build readiness as we sail in the Indo-Pacific,” said Cmdr. Michael Root, Jackson Gold Crew commanding officer. “The complex maneuvering and operations we accomplished without meeting face-to-face reflect the strong friendship and maritime professionalism that our nations and navies share.”

Coming together at sea with partners and allies allows the US Navy to operate closely with foreign navies in ways that shore exercises do not. It also gives the crews real-life scenarios in which to practice their routine watchkeeping and communication skills with foreign vessels.

“On our way to the Gulf of Aden and Somali waters to engage a counter-piracy mission, we met with USS Jackson, and conducted various tactical training,” said Cmdr. WAKUSHIMA Hidetaka, JMSDF JS Yudachi commanding officer. “Despite COVID-19, Japan and U.S. naval forces are working closely in any sea area, making full use of the characteristics of the naval force.”

Attached to Destroyer Squadron (DESRON) 7, Jackson is on a rotational deployment to the U.S. 7th Fleet area of operations in support of security and stability in the region, and to work alongside allied and partner navies to provide maritime security and stability, key pillars of a free and open Indo-Pacific.

Check out Naval Library App to find out more about the specifications of Murasame Class destroyers.

China warns US for more explanation about nuclear submarine collision