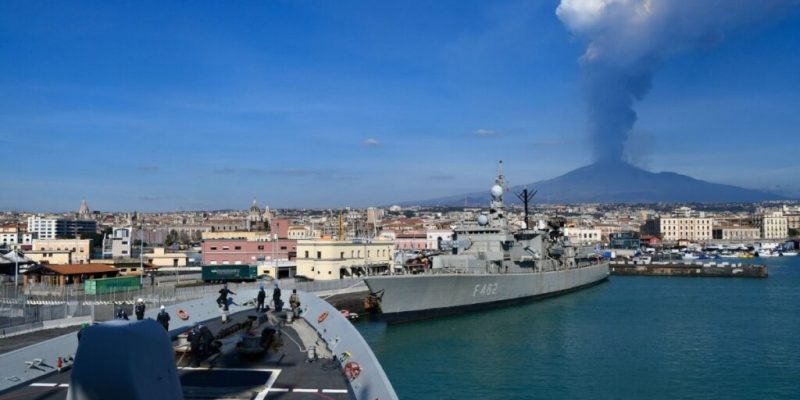 Dynamic Manta aims to provide all participants with complex and challenging warfare training to enhance their interoperability and proficiency in anti-submarine and anti-surface warfare skills.

Vice Admiral Keith Blount, Commander of NATO’s Allied Maritime Command, said that “The strength of NATO military forces is found in our command, control and communication structures, which can best be practiced during live exercises such as Dynamic Manta 2021. Developing and maintaining highly trained, ready forces that integrate seamlessly is the bedrock of our collective deterrence and defense. This live exercise will also further demonstrate that COVID-19 hasn’t changed NATO’s resilience and readiness. I appreciate the outstanding support of the Italian Navy and the Force contributing nations to help collectively achieve this objective.”

“Dynamic Manta is one of the two major Anti-submarine warfare exercises led every year by NATO Maritime Command. SNMG2, as a NATO Standing Force, usually participates in this type of exercises, focused not only on training and keeping the high readiness of the Force but also on enhancing cohesion and interoperability between Force contributing nations, showing NATO presence and assuring Allies of the maritime commitment to collective defense,” said Rear Admiral Manuel Aguirre Alderguia, Commander of SNMG2.

As the host nation, Italy provides support in the Catania harbor, naval helicopter base in Catania, naval air station in Sigonella, and logistic support (refueling operations, medical assistance, and personnel accommodation) from Augusta naval base.

Each surface ship will have the opportunity to conduct a variety of submarine warfare operations. The submarines will take turns hunting and being hunted, closely coordinating their air and surface participants’ efforts.

Anti-submarine warfare capability is the primary ability of Nato Naval force to evade the submarine threats for keeping deterrence and protecting the sea lines of communications.

7 Emerging Technologies in SEO and Their Applications

By OTC5 days ago20 views

By OTC6 days ago18 views