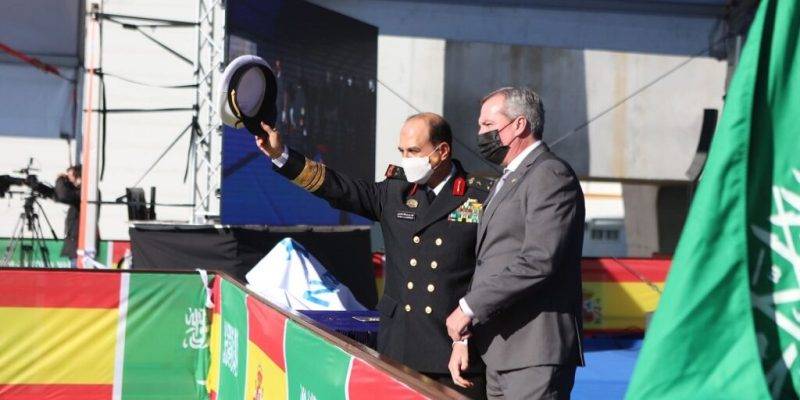 On December 4, Navantia launched the fifth Avante 2200 corvette for the Royal Navy of Saudi Arabia, which is being built in the shipyards of the Bay of Cádiz. The new ship is named “Unayzah” in honor of the city located north of the country’s capital.

The Commander of the Royal Saudi Navy, the Secretary of State for Commerce, the Secretary-General for Industry and SMEs, and the President of Navantia, all attended the celebration at the San Fernando shipyard. They have engaged through video with the Admiral Chief of Staff of the Navy (AJEMA), Admiral General Antonio Martorell Lacave, and Walid Abukhaled, CEO of SAMI (Saudi Arabia Military Industries). The launching event was held with health precautions in place, and Navantia employees and their families were in attendance.

The ceremony for the fifth Avante 2200 corvette began with a reading from the Koran, followed by the presentation of numerous videos, including ones about the city of Unayzah, which inspired the ship’s name, the Avante 2200 program, and the construction of this fifth corvette. The person in charge of the reception was José Antonio Rodrguez Poch, Director of the Corvettes and Maritime Action Vessel Business, who congratulated the workers for their dedication to the program and those who had finished the launch preparations.

The Commander of the Royal Saudi Navy stated during the occasion that the launch of the five corvettes on such a short and demanding schedule was a great achievement and a strong indication of Navantia’s dedication to meeting each milestone of the project with high standards. standards of quality.

The Vice-Admiral has expressed his gratitude to the leadership of the Kingdom of Saudi Arabia for the endless support provided to the RNSF. He also expressed gratitude to Navantia’s president and the Navy’s Chief of Staff for the Spanish Navy’s significant contribution to the project’s achievement.

Ricardo Domnguez, the president of Navantia, has expressed gratitude to the workers that worked on the building of a ship “with the highest attributes and adhering to the stipulated timeframes, despite the many hurdles.”

“I heartily thank you, everyone, comrades from Navantia and the participating industry, for making it possible to celebrate the launch of this corvette.” This deed demonstrates the outcome of our people’s hard effort. It’s not always possible to see the end consequence of an endeavor so plainly,” he said.

He also congratulated the Spanish Navy, the Royal Saudi Navy, and the defense ministries of both countries for their ongoing support for the program’s success. “Spain and Saudi Arabia are united by strong and lasting ties, and today, given the importance of international collaboration, strengthening an already existing association is the best way to face the present and the future,” said Navantia’s president, adding that the company, as “a leader in the sector internationally recognized for its quality and technology, will be the most reliable partner for future projects.”

The corvette’s construction will continue in the ocean until her arrival in Spain in August 2023. The vessel will be finished in Saudi Arabia and delivered in February 2024.

The “Unayzah” corvette is the fifth in the Avante 2200 program’s series. It has a length of 104 meters, a beam of 14, and can accommodate a total of 102 people (crew and passengers). It will reach a maximum speed of 27 knots and, among other aspects, it has the capacity to carry 21 days’ supplies on board.

The Avante 2200 corvettes’ design is cutting-edge, while maximizing Navantia’s participation by incorporating its own products, such as the CATIZ combat system, the HERMESYS integrated communications system, the DORNA fire direction, the Integrated Control System. Platform, and the MINERVA integrated bridge, as well as other equipment developed under license by Navantia, such as MTU motors and RENK gearboxes.

This deal, which has been in effect since November 2018, enhances Navantia’s near future and helps all of the company’s shipyards and ancillary industry, particularly the entire Bay of Cádiz.

In addition to construction, the contract includes Life Cycle Support for five years, beginning with the delivery of the first ship, with the possibility of an additional five years.

It also includes the provision of various services, such as integrated logistics support, operational and maintenance training, the provision of Training and Training Centers for ships’ Combat System and Platform Control System, the aforementioned Life Cycle Support, and the systems for maintaining ships at the Jeddah Naval Base.