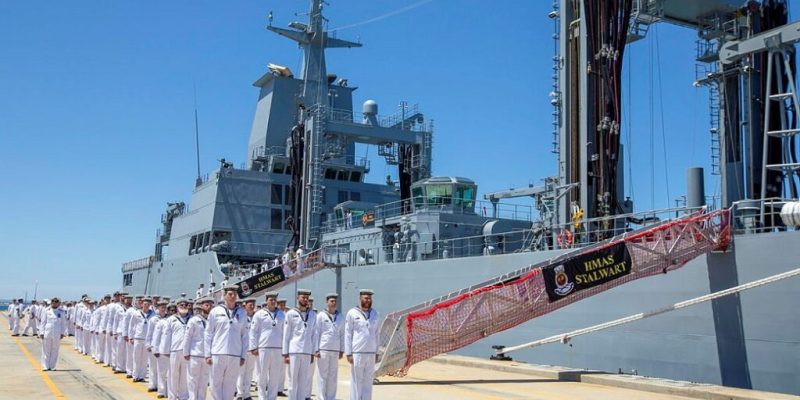 “These ships represent a generational shift from the capability provided by previous support ships in that they are equipped with a combat management system that improves information sharing with other ADF and allied assets,” Vice Admiral Noonan said.

“Both HMAS Stalwart and HMAS Supply represent cutting-edge maritime technology and can seamlessly integrate into both national and multinational task groups, which is paramount in the challenging strategic environment.”

“To be part of a commissioning crew is a defining moment in the lives of all mariners and often represents the pinnacle of a naval career,” Commander McCracken said.

“The entire ship’s company has worked extremely hard to prepare for today and will continue to do so as we undertake the various sea trials that will allow us to integrate our ship into the fleet.”

Stalwart is the third Royal Australian Navy vessel to carry the name, with the first being an S-class destroyer in the early 20th century, and the second an escort maintenance ship that was decommissioned in 1990.

“The name Stalwart has a proud history in our Navy and I am confident that the men and women of this new ship will maintain that tradition as Stalwart (III) enters service,” Vice Admiral Noonan said.

The new auxiliary oiler replenishment ships were built in Spain by Navantia, with Australian industry playing a key role in both the development and ongoing support of the vessels.

Navantia Australia is acting as Prime Contractor and manages them through-life support for these vessels for their first five years of service. As the design authority for the Supply class, Navantia Australia is also providing configuration and baseline management as an integral component of the through-life support for these vessels.

HMAS Stalwart, and sister ship, HMAS Supply, were built at Navantia’s shipyard in Ferrol, Spain, with her final fit-out performed at Garden Island, Western Australia in this year.

HMAS Stalwart is the second of Australia’s two newest AORs, which will provide operational support, replenishing the fleet in deployments of the Australian naval and combat forces operations far from the port and on the high seas, as they remain in service over the next 25 years.

Check out Naval Library App to find out more about the specifications of the Supply-class oilers.