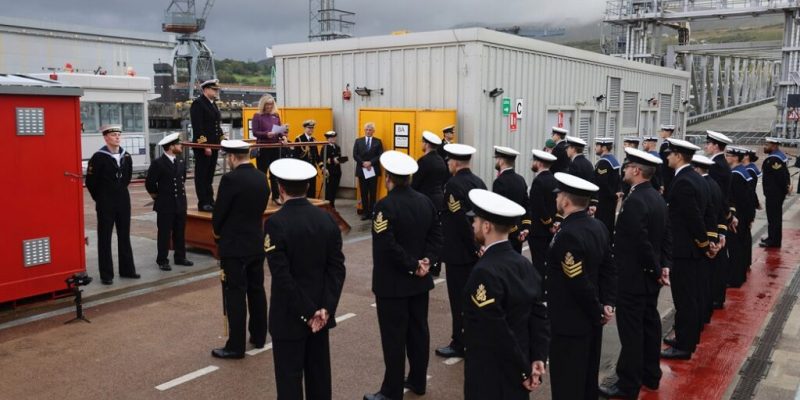 On 23 September, during a ceremony at the Royal Navy’s Clyde base in Scotland, the fourth ASTUTE-class attack submarine HMS Audacious was formally commissioned, according to a press release issued by the Royal Navy.

Members of the ship’s company and personnel from the Submarine Flotilla (SUBFLOT) were joined at the Faslane site by the boat’s sponsor, Lady Elizabeth Jones, as they welcomed HMS Audacious to the Royal Navy Fleet.

The ceremony marks the completion of extensive tests and sea trials for the vessel with Audacious now ready for Royal Navy operations around the globe.

“As we now move from sea trials into our operational sea training programme, I and the whole ship’s company are ready for the challenge ahead.

“This formal commissioning ceremony marks another major milestone in the platform being fully operational and ready for tasking.”

During the ceremony, members of Audacious’ ship’s company formed platoons on the jetty with Lady Elizabeth Jones inspecting them. Afterwards, she addressed those gathered for the occasion and cut the commissioning cake.

HMS Audacious arrived at HM Naval Base Clyde for the first time on April 7 last year where she joined sister-vessels HMS Astute, HMS Artful and HMS Ambush. The Astute-Class nuclear-powered submarines are among the most sophisticated underwater vehicles ever constructed, gradually replacing the Trafalgar-Class submarines which have provided sterling service for almost four decades.

The vessels are capable of circumnavigating the globe while submerged, producing their own oxygen and drinking water.

Speaking of the Commissioning, Commodore Jim Perks, Head of the Royal Navy Submarine Service, said: “This is an extremely important day in the life of HMS Audacious and I am delighted that the sponsor, Lady Elizabeth Jones, was able to formally commission this, our fourth Astute-Class submarine today.

“Throughout this pandemic, Audacious has delivered her extensive trials programme without fuss and with considerable style.

“I wish the boat, crew and their families all the very best for the future and look forward to seeing her deliver on operations.”

Check out Naval Library App to find out the specifications of Astute-class SSBNs.

By admin11 hours ago17 views

By admin11 hours ago15 views

By admin3 days ago34 views