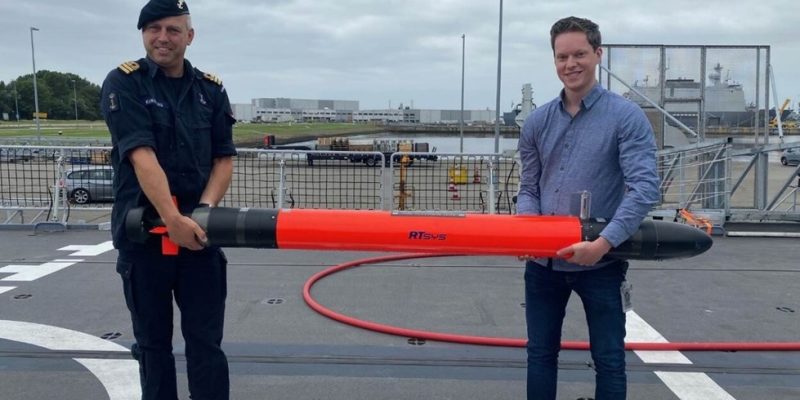 The Royal Netherlands Navy’s frigates and helicopters play a vital role in the hunt for enemy submarines, just as it does for all navies across the world. However, training personnel is an expensive endeavour, and training time with submarines is both restricted and prohibitively expensive. A new Anti-Submarine Warfare training target has been developed to address these issues.

The orange practice target is more than 2 meters long and appears underwater like an actual submarine of tens of meters in length. The sonar equipment of a submarine fighter produces an image that is lifelike.

In response to broadcast pings, the target responds in a realistic manner. The request for a practice target like this came from Captain-Lieutenant Commander Björn Kerstens four years ago. “It’s amazing that they’ve arrived at this time,” said the commander of the Zr.Ms. Van Amstel moments before the ship sets sail for a three-month voyage.

Usefulness and necessity of SEMA

The Dutch Navy had been waiting for the anti-submarine training targets for a long time. The system is designed to provide low-cost, realistic, and easily available training for operators of the low-frequency LFAPS sonar on the Van Amstel and Van Speijk, as well as the HELRAS sonar on the NH90 maritime helicopters, anywhere in the globe at any time.

“During training, the drone serves as a submarine simulator. Their acoustic response is realistic within their peripheral frames, and they are inexpensive, portable, and reusable,” explains Captain-Lieutenant Commander Paul Dröge, Head of the Underwater Combat Technology Bureau. “They are also quite affordable. Crew members can evaluate their training.”

Race against the time

The sailing term of the Zr.Ms. Van Amstel was set as a strict deadline for the project in order to ensure its completion. The underwater drone’s Factory Acceptance Test (FAT) and Sea Acceptance Test (SAT) had to be successfully performed, and the operators had to be taught in programming, maintenance, deployment, and recovery of the submarine. In order to depart on time, the drone needed to be fully operational. “It was fascinating to see if it would work,” says Stefan Schut, a DMO employee who works in underwater warfare technology and served as technical advisor for this project. It has been demonstrated throughout history that something unexpected always occurs throughout the purchasing process.

However, this was not the case in Den Helder. Because the Royal Netherlands Navy stated its pleasure as RTsys demonstrated its professionalism by adhering to every requirement’s line and successfully completing the SEMA targets on time.

Check out Naval Library App to find out more about the specifications of the SEMA ASW training target.