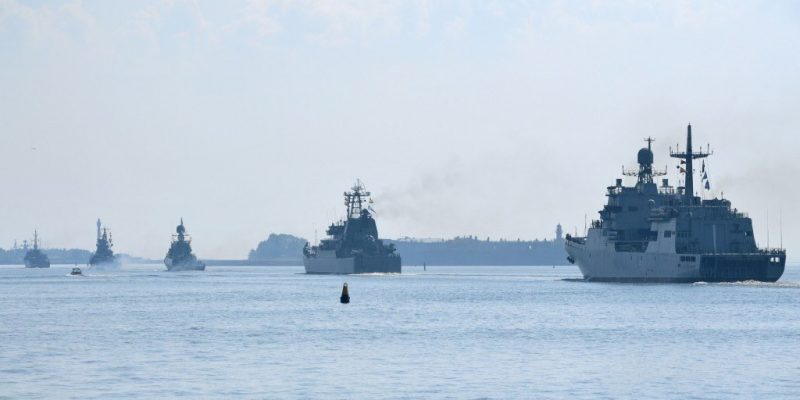 On July 25, the Russian Navy held the Main Naval Parade in St. Petersburg and Kronshtadt in honour of Navy Day.

On Russia’s Navy Day on Sunday, Russian President Vladimir Putin reviewed the Main Naval Parade on the Neva River in St. Petersburg. Admiral Nikolai Yevmenov, Commander-in-Chief of the Russian Navy, briefed Putin on the readiness for the naval parade.

A total of 54 vessels of different types and more than 4,000 servicemen are slated to participate in the main event. For the first time, the parade in St. Petersburg will feature three nuclear-powered submarines. The main parade was attended by 46 ships, boats and vessels last year.

Foreign warships were also present at the event. The parade was attended by Iran’s Moudge-class frigate Sahand and forward base ship Makran, as well as India’s Talwar-class frigate INS Tabar. Vietnam sent two warships to participate in the Main Naval Parade.

The first Russian Navy was established in 1696 for the Tsardom of Russia. Navy Day was established in the Soviet Union by a decree of the Council of People’s Commissars of the USSR and the Central Committee of the VKPB on June 22, 1939, in connection with the Battle of Gangut. The Supreme Soviet’s Presidium cancelled the holiday on October 1, 1980. Navy Day was reinstated by President of Russia Vladimir Putin’s Decree.

Check out Naval Library App to learn more about the specifications of the Russian Navy assets.

How to Use SERP Features to Inform Your Content Strategy

A reminder on qualifying links and our link spam update