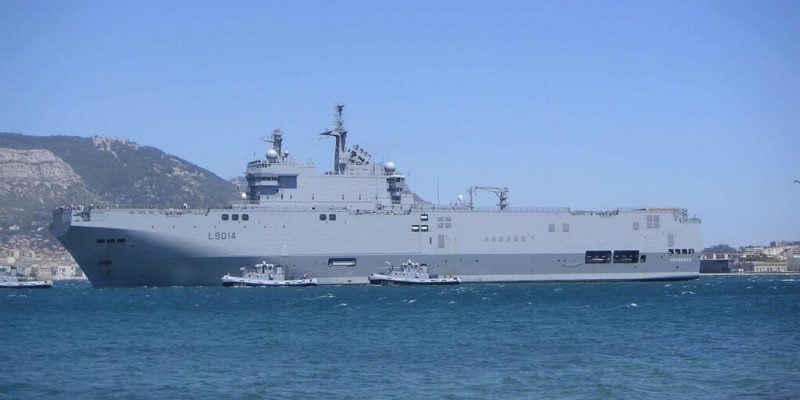 The Zaliv shipyard in Kerch has begun forming the hulls of two future Project 23900 universal amphibious assault ships (UDC), according to Russian TASS. The work is being carried out with the experience gained in constructing Mistral-class ships.

In May 2020, the Russian Ministry of Defense signed a contract for the construction of two helicopter carriers worth about 100 billion rubles. The laying ceremony of the Project 23900 ships was held with the participation of Russian President Vladimir Putin on July 20, 2020. At the official ceremony for the laying down of Project 23900, a computer-generated image was showcased to represent the warship (Picture above). Based on that image, the design of Project 23900 looks like a hybrid between the Lavina and the Mistral.

The Project 23900 ships are the newest class of Russian amphibious assault ships (LHDs) intended as a replacement for the French Mistral-class, two of which were ordered by Russia in 2011, but that France refused to deliver in September 2014 due to Russia’s military intervention in Ukraine. A deal for two ships for the Russian Navy was announced by then French President Nicolas Sarkozy on 24 December 2010 and signed on 25 January 2011. In September 2014, French President François Hollande announced the postponement of delivery of the first warship, Vladivostok, due to the Russia–Ukraine crisis. On 5 August 2015, President Hollande and Russian President Vladimir Putin announced that France would refund payments and keep the two ships; the two ships were later sold to Egypt.

According to the TASS, the displacement of the Project 23900 ships will be 30 thousand tons. One ship will be able to transport up to 1,000 marines, 16 helicopters, and the dock chamber will accommodate up to four landing craft.

The new UDC, possibly, in addition to 16 helicopters, will carry up to 4 reconnaissance and attack unmanned aerial vehicles (UAVs) S-70 “Okhotnik”. According to TASS, the Okhotnik will carry out both strike missions and target designation tasks for the Zircon hypersonic missiles launched from other ships.,

The Sukhoi S-70 Okhotnik-B (Hunter) is a Russian stealth heavy unmanned combat aerial vehicle (UCAV) being developed by Sukhoi and Russian Aircraft Corporation MiG as a sixth-generation aircraft project. The drone is designed to perform reconnaissance and strike missions using high speed and fully autonomous flight. Reportedly it is made of composite materials and treated with a radiation-absorbent coating.

Payload: Up to two tonnes

The Zaliv shipyard is one of the largest industrial enterprises in Crimea, it has been operating in the shipbuilding and ship repair market since 1938. The plant’s production facilities include a dry dock and hull shops, which allow the construction of large-capacity vessels up to 340 meters in length for various classes and purposes.