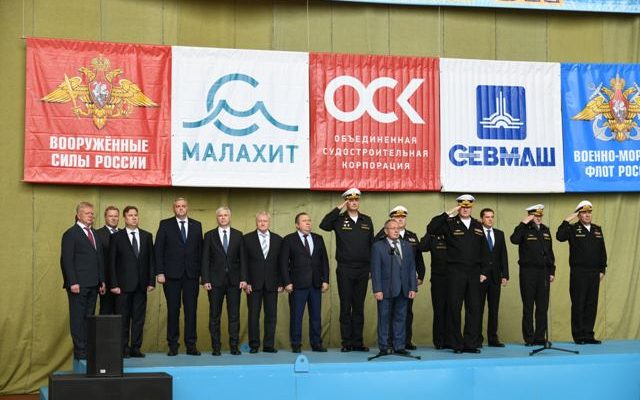 The Sevmash Shipyard in Severodvinsk in Russia’s northwest has floated out the advanced Project 885M (Yasen-M) nuclear-powered submarine Krasnoyarsk on Jul 30, 2021. The submarine is the fourth in a series of nine Yasen-class multi-purpose vessels for the Russian navy.

The ceremony was attended by Commander-in-Chief of the Navy, Admiral Nikolai Evmenov and other high-ranking officials.

The Admiral said two Yasen-class submarines are already on active combat duty, the “Severodvinsk” and the “Kazan”.

“Dear shipbuilders and the crew of the submarine. Today is an important day that will pass down in the history of the Navy. The Sevmash shipbuilders have confirmed their professionalism. Plans have been drawn up for this vessel and its crew has been trained. I am confident that the Sevmash Shipyard will deliver it on schedule”, Evmenov said in his speech during the ceremony, according to Sevmash shipyard.

During the ceremony, the command to roll out the latest nuclear-powered submarine from the slipway was given by Sevmash CEO Mikhail Budnichenko, following which the sub’s future commander Captain 2nd Rank Ivan Artyushin traditionally smashed a bottle of champagne against the ship’s board.

Project 885M Yasen-M, also referred to as Graney class, is a series of the newest nuclear-powered cruise missile submarines designed by Malakhit and Sevmash. Based on the Akula class and Alfa class designs, the Yasen class is projected to replace the Russian Navy’s current Soviet-era nuclear attack submarines.

Project 885/885M submarines are armed with Kalibr-PL and (or) Oniks cruise missiles and will eventually carry Tsirkon hypersonic missiles as their basic weapons.

Each submarine can carry 32 Kalibr or 24 Oniks (other sources claim 40 Kalibr and 32 Oniks) cruise missiles which are stored in eight (ten for 855M) vertical launchers (additional missiles may be carried in the torpedo room at the expense of torpedoes). It will also have ten 533 mm tubes and mines and anti-submarine missiles such as the RPK-7.

The first Russian submarine class is equipped with a spherical sonar, designated as MGK-600 Irtysh-Amfora. The device (allegedly the Irtysh/Amfora sonar system) was tested on a modified Yankee-class submarine. The sonar system consists of a spherical bow array, flank arrays, and a towed array.

Yasen-class submarines are the first to be equipped with a fourth-generation nuclear reactor. The reactor, built by Afrikantov OKBM, will allegedly have a 25-30-year core life and will not have to be refueled.

“Krasnoyarsk” follows the “Novosibirsk” which was launched from the ship hall at Sevmash in late December 2019. “Novosibirsk” began sea trials in the White Sea a few weeks ago and if all goes well should be handed over to the Pacific Fleet by the end of 2021.

The nuclear submarine was named after the largest cultural, economic, industrial, and educational center of Central and Eastern Siberia – the city of Krasnoyarsk by the order of the Commander-in-Chief of the Russian Navy.

Check out Naval Library App to learn more about the specifications of the Project 885/885M Class Submarines.

By OTC2 days ago29 views

By OTC4 days ago35 views