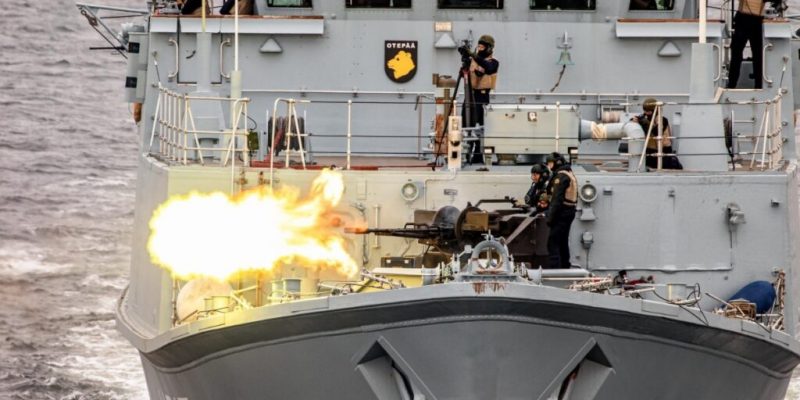 The training was held in close coordination with the Royal Danish Navy. During the past days, all units could train their skills in force protection, medical treatment, and damage control.

After completing the exercise, the group sailed through the Little Belt – one of the three Danish straits which connects the Baltic with the Kattegat – allowing for some challenging navigation in strong currents and spectacular sights passing under impressive bridges on the way to Kiel.

The ships entered the German Navy’s home, paying their respects, passing the imposing naval memorial at Laboe on the eastern shore of Kiel Bay; the red-brick tower is Germany’s equivalent of the three naval memorials in Portsmouth, Plymouth, and Chatham.

The group departs Kiel today and heads deeper into the Baltic for further exercises and operations dealing with wartime bombs, mines, and explosives dropped or dumped in the sea.

The MULTEX range provides the possibility and capability of life firing exercises. To create a realistic scenario, the ships were threatened by aerial assets and fast inshore attack crafts. During the force protection exercises, all units were tested on maneuvering, communicating, and reacting to suspected threats. The assets participated in a gunnery exercise with aerial, moving surface, and floating targets.

“The opportunity to train force protection against a realistic and moving threat within a formation is rare. Therefore, the MULTEX range was an excellent training ground for SNMCMG1,” said Commander of SNMCMG1, Commander Jan Wijchers.

SNMCMG1 conducted Historical Ordnance Disposal Operations (HODOPS) in the North Sea, along with training activities and a port visit to Den Helder in the Netherlands last month.