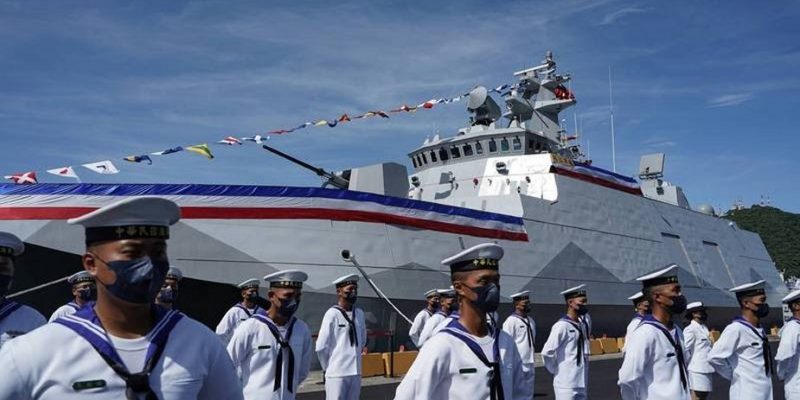 The Republic of China Navy (RoCN) has commissioned its first upgraded Tuo Chiang (or Tuo Jiang) class fast missile corvette during a ceremony held at the Suao Naval Base in northeastern Taiwan’s Yilan County.

Tsai Ing-wen, Taiwan’s President, attended the ceremony and stated “Not only is the Tajiang warship more stealthy and stable in navigation, but it is also the navy’s first small ship equipped with air defence capabilities. I believe that the addition of this warship will strengthen the Navy’s ability to defend the seas and territories.”

During the event, the ROC Navy received the second Min Jiang-class mine-laying ship.

The corvette, named Ta Chiang (pennant number 619), was launched in December 2020 at Lungteh Shipbuilding’s Suao facility. Taiwan plans to build five additional ships of the improved variant by 2023, with up to five additional corvettes following.

The Tuo Chiang-class corvette is a class of fast (up to 45 knots, 83 kilometres per hour, 52 miles per hour) and stealthy multi-mission corvettes designed and built in Taiwan for the Republic of China (Taiwan) Navy.

It is armed with eight subsonic and eight supersonic anti-ship missile launchers, a Phalanx Close-In Weapons System, and a 76 mm (3 in) main gun. The ship is capable of operating in sea states up to 7, with waves as high as 20–30 ft (6.1–9.1 m).

The Hsiung Feng III is the third anti-ship missile in the Chungshan Institute of Science and Technology’s (CSIST) Hsiung Feng series. The HF-3 missile is propelled by a ramjet, with the initial acceleration provided by two boosters. The ROC Navy’s Cheng Kung class and Kang Ding class frigates are already equipped with the ramjet-powered supersonic anti-ship missile.

Check out Naval Library App to find out the specifications of the Tuo Chiang-class corvettes.

The Three Bosses of SEO