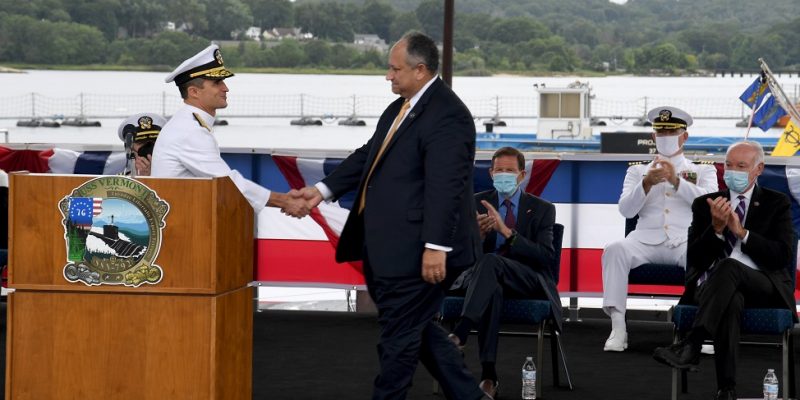 “Vermonters have served with valor from the highest mountains to the depths of the ocean,” said Secretary of the Navy Carlos Del Toro, who served as the event’s keynote speaker and was attending his first ship ceremony as secretary.

“This vessel has already proven itself in service, not only because it was designed the right way, but because of the exemplary work of the men aboard,” he continued.

Vermont was administratively commissioned on April 18, 2020, but due to restrictions on large gatherings because of the COVID-19 pandemic at the time, no traditional commissioning ceremony was held. To ensure the health and safety of the crew and all those in attendance during the ceremony Saturday, attendance was limited and no public or media tours were held. Masks were required in all indoor spaces and encouraged in outdoor spaces.

Since its administrative commissioning, USS Vermont has been an active submarine in the U.S. Navy, including participation in anti-submarine warfare exercises alongside the Brazilian navy in the U.S. 4th Fleet area of operations in December of 2020.

In addition to Del Toro, Rear Adm. Douglas Perry, director of undersea warfare on the chief of naval operations’ staff and a Vermont native, was among those who spoke at the Saturday ceremony.

Perry spoke of the legacies of previous Navy ships with Vermont ties and military heroes from the state’s past, like Ethan Allen during the Revolutionary War and 19th Century Admiral of the Navy George Dewey.

This is the third U.S. Navy ship to bear the name Vermont, but first in a century. The first was one of nine 74-gun warships authorized by Congress in 1816. The second, Battleship No. 20, was commissioned in 1907 and first deployed in December of that year as part of the “Great White Fleet.” The battleship Vermont was decommissioned on June 30, 1920.

The submarine Vermont was christened in a traditional ceremony at General Dynamics’ Electric Boat shipyard in Groton, Connecticut, on Oct. 20, 2018.

“She was built by the best, for the best, and is the best of the best,” said Gloria Valdez, the ship sponsor and a former deputy assistant secretary of the Navy overseeing shipbuilding and modernization. “She is the most technologically advanced submarine in the world.”

USS Vermont is 377 feet long, has a 34-foot beam and will be able to dive to depths greater than 800 feet and operate at speeds in excess of 25 knots submerged. She has a crew of more than 130 Navy personnel.

“We get to finally say, ‘The ship’s in commission, thank you so much to everyone who supported us,’” said Cmdr. Charles Phillips, the commanding officer of USS Vermont. “This represents the people of Vermont. We want to make them proud and let them justify their confidence in us as we defend our country.”

Blocks I-III Virginia-class submarines are planned to undergo four depot maintenance availabilities and conduct 14 deployments. Block IV design changes are intended to reduce planned availabilities by one to three, and increase deployments to 15.

Check out Naval Library App to find out the specifications of the Virginia-class nuclear-powered attack submarine.