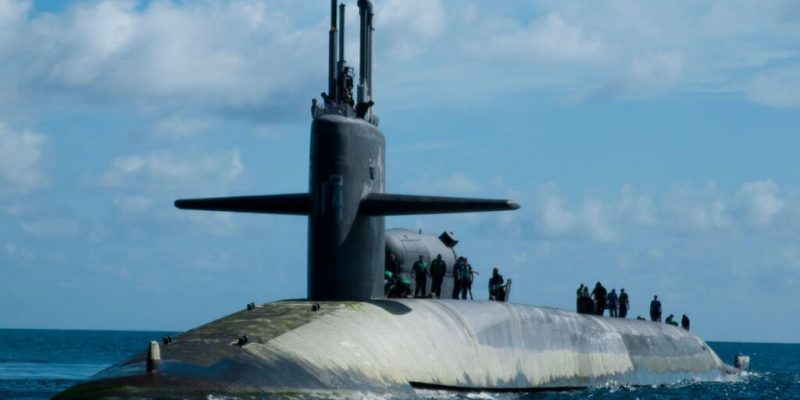 SSBNs, on the other hand, serve a specialized mission of strategic nuclear deterrence. SSBNs are equipped with submarine-launched ballistic missiles (SLBMs), which are large, long-range missiles armed with multiple nuclear warheads, to carry out this mission. SSBNs launch their SLBMs from large-diameter vertical launch tubes in the boat’s middle section. The primary mission of the SSBNs and their SLBMs is to deter a nuclear attack on the United States by demonstrating to other countries that the United States has an assured second-strike capability, which means a survivable system for carrying out a retaliatory nuclear attack.

The U.S. Navy SSBNs, which are sometimes referred to informally as “boomers,” form one leg of the U.S. strategic nuclear deterrent force, or “triad,” which also includes land-based intercontinental ballistic missiles (ICBMs) and land-based long-range bombers.

The boats were initially designed to each carrying 24 SLBMs. However, as part of DOD’s plan to comply with U.S.-Russia strategic nuclear arms control limits, four SLBM launch tubes on each boat have been deactivated, reducing to 20 the number of SLBMs they can carry.

Unlike most U.S. Navy ships, which are operated by single crews, SSBNs are used by alternating crews (called the Blue and Gold crews) to maximize the percentage of time they spend at sea in deployed status.

In explaining the planned procurement quantity of 12 boats, the Navy states the following:

– Ten operational SSBNs—meaning boats not encumbered by lengthy maintenance actions—are needed to meet strategic nuclear deterrence requirements for having a certain number of SSBNs at sea at any given moment.

– Fourteen Ohio-class boats were needed to meet the requirement for ten operational boats because, during the middle years of the Ohio class life cycle, three and sometimes four of the boats were nonoperational at any given moment on account of being amid lengthy midlife nuclear refuelling overhauls or other extended maintenance actions.

– The Columbia class is being designed for 42-year expected service life.

– Unlike the Ohio-class design, which requires a midlife nuclear refuelling, the Columbia class is to be equipped with a life-of-the-ship nuclear fuel core (a nuclear fuel core that is sufficient to power the ship for its entire expected service life).

– The Columbia class is to have SLBM launch tubes that are the same size as those in the Ohio class (i.e., tubes with a diameter of 87 inches and a length sufficient to accommodate a D-5 SLBM).

Ballistic missile submarines are the most survivable leg of the triad. When on patrol, SSBNs are, at present, virtually undetectable, and there are no known, near-term credible threats to the survivability of the SSBN force. The Columbia Class SSBN Submarines will be the backbone of U.S. nuclear deterrence in the ocean and seas.

Check out Naval Library App to find out the specifications of the U.S. Navy submarines.