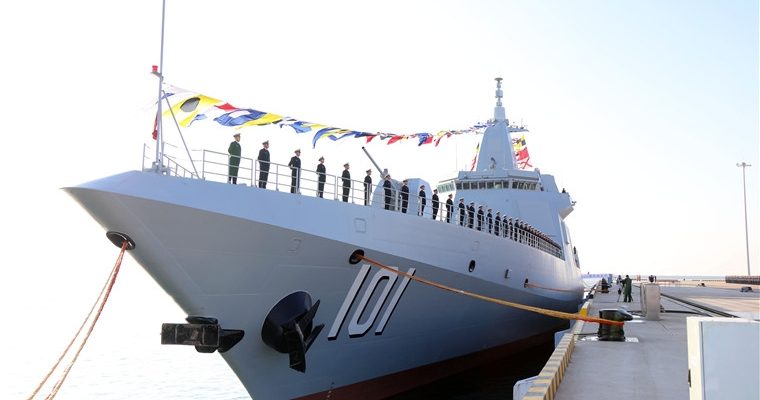 The People’s Liberation Army Navy, shortly the Chinese Navy, commissioned Nanchang, the first of the new Type 055-class, also known as the Renhai-class, destroyers in the early days of 2020. It is confident that the ship, which the USA classifies as a cruiser considering its dimensions and features, will provide a significant increase in China’s blue-water combat capability.

The destroyer was launched on June 28, 2017, and commissioned on January 12, 2020, but Nanchang has participated in the 70th-anniversary parade of the Chinese Navy on April 23, 2019. Five additional destroyers of the same class have already been launched. The Chinese Navy plans to assign at least two Type 055s to each of its three fleets. These six destroyers had been launched within nearly 18 months.

The Type 055-class is more than a destroyer. The multi-mission ship has highly effective air defence, anti-surface warfare, land-attack, and anti-submarine warfare capabilities. In addition, it, as the flagship, can provide command and control service to the task forces. The US Navy staff expects the Type 055s to fulfil a similar role as the Ticonderoga-class cruisers.

The total loaded displacement of the destroyer is about 12 to 13,000 tons. It has 180 meters in length, 20 meters beam, and 6.6 meters draught. Four 38,000-horsepower QC-280 gas turbines provide 30 knots maximum speed. Thus, the ship can travel 9,300 kilometers with its economical speed. It is estimated that the complement of Type 055 is over 300 men. The destroyer can fire HHQ-9, YJ-18, CJ-10, and Yu-8 missiles from its 112-cell vertical launching system. The ship is also equipped with one 130mm gun, one 30mm 11-barrel close in weapon gun system, and one HQ-10 close defense missile system.

The continuous structure amidship of Type 055 increases internal volume and reduces radar cross-section. As a stealth ship, the destroyer has shallow radar, noise, infrared, and electromagnetic radiation signatures. The fully loaded displacement, which is higher than its predecessors, of Type 055 also indicates that it has more increased capabilities than them. This feature helps the ship be more stable in the high sea and carry more ammunition, fuel, and supplies. Thus, the destroyer can perform operations for a longer time without replenishment. Furthermore, with its 30-knot maximum speed, Type 055 can effortlessly escort the Chinese aircraft carriers Liaoning and Shandong.

Its most crucial system is four H/LJG-346B active electronically scanned array radars. The active electronically scanned array radars allow ships and aircraft to radiate powerful radar signals while still remaining stealthy and being more resistant to jamming. Unlike the predecessor models that use air cooling systems, the B version has a higher performance water cooling system. The main S-band array of the radar is sandwiched between two rows of X-band arrays. While the X-band arrays effectively detect stealth air and surface targets, the S-band array of the H/LJG-346B may be insufficient to lock missiles onto these types of targets. However, the low positioning of the flat-array radar system on Type 055 is another handicap. That position reduces the radar’s range.

The primary armament of the destroyer is missiles carried in 112 universal vertical launch cells. Different from Russian-made models, the vertical launching system of Type 055 is not rotary. This design eliminates the rotary system to simplify the system and increases the missile launch speed.

The destroyer is equipped with the YJ-18 anti-ship missiles for anti-surface warfare. This missile can reach 220 to 540 kilometres range. During the midcourse phase, the YJ-18 cruises at the speed of Mach 0.8. It increases its speed to Mach 2.5 to 3 during the terminal phase.

Depending on the operational requirements, the HQ-16 mid-range air defence missiles can also be deployed to the universal vertical launch system of Type 055. However, the Chinese Navy does not mention these missiles within the standard equipment of the ship.

The HQ-26 anti-ballistic missiles, which are currently under development, will soon be deployed to Type 055s. The ship also has a land assault capability with CJ-10 cruise missiles with a 500-kilogram warhead and 1500 kilometres. This missile has a sharp tip designed to reduce radar cross-section.

The 130mm single barrel H/PJ-38, also known as the H/PJ-45, the gun has a maximum range of about 30 kilometres and a rate of 40 rounds per minute. It can be used against land, air, and sea targets. It is suggested that H/PJ-38 will be replaced by an electromagnetic railgun or lase weapon in the future. However, before this change, it is imperative to integrate electric propulsion on the ship.

On Type 055, there is one 30mm 11-barrel H/PJ-11 gun and one HQ-10 missile system as the close-in weapon systems. Chinese sources claim that the H/PJ-11 can intercept incoming anti-ship missiles up to a speed of Mach 4 with a 96 per cent success rate, and the HQ-10 can intercept 23 targets one after another in a salvo.

In addition to torpedo tubes, the destroyer can fire the Yu-8 anti-submarine warfare missile, which carries the APR-3E lightweight torpedo, from its vertical launching systems. Furthermore, thanks to its large hanger and landing platform, the ship can operate two helicopters.

Currently, Type 055 carries the Z-9Cs. However, these helicopters will be replaced with the Z-18Fs with nearly twice patrol endurance shortly than its predecessor. Also, Z-18F can carry four lightweight torpedoes instead of two.

Given its capabilities and firepower, the Type 055 is similar to the US Ticonderoga-class and Russian Slava-class cruisers. Still, the US Arleigh Burke, the Japanese Kongō, Atago, and Maya, as well as the South Korean the Sejong the Great-class destroyers patrolling on the same seas, have the strengths close to their Chinese rivals. But Type 055 can be used as the flagship of a task force different from others. Therefore, it is not wrong for the US Navy to classify these ships as cruisers from this point of view. However, it should not be forgotten that both parties have a political reason to make different definitions. The USA seeks to make China look more aggressive by calling the Type 055 a cruiser, while China classifies this ship like a destroyer and looks less aggressive.

Check out Naval Library App to find out the specifications of the Type 055-class destroyers.

By admin19 hours ago19 views

By admin19 hours ago14 views

By admin23 hours ago22 views