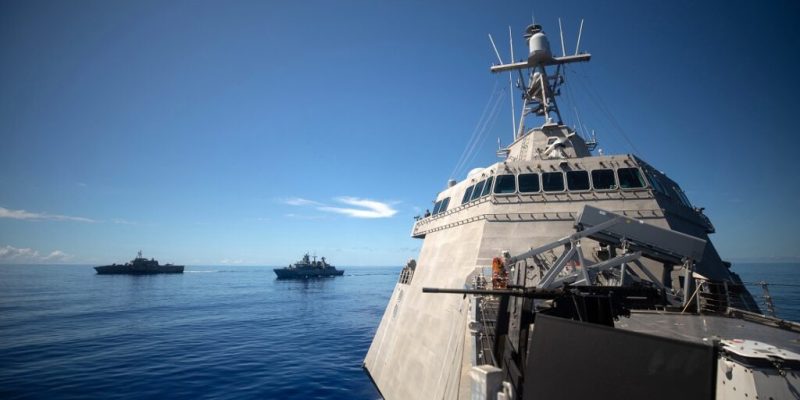 “It’s always great to host partner nations and allied forces, and we were grateful to welcome the commanding officer and crew of Bayern aboard Tulsa, following our recent bilateral operations,” said Cmdr. Travis Dvorak, Tulsa Gold Crew commanding officer. “After sailing together, we enjoyed sharing sea stories and hearing about their experiences. While there are differences between our ships and crews, there are many more similarities.”

While onboard, Tulsa’s crew highlighted the unique operational capability of the littoral combat ship, and the distinct commitment to building relationships with partners and allies, integrating with joint operational forces, conducting presence operations, and providing maritime security and stability. Crewmembers explained the functions of the various spaces throughout the ship to include the flight deck, mission bay, pilothouse, galley, engineering rooms, and berthing spaces.

The discussions went beyond bilateral operations and highlighted shipboard commonalities with German-designed engineering equipment integrated into the LCS. The main propulsion diesel engines, ship’s service diesel generator, and additional other engineering equipment are based on designs by German company MTU Aero Engines.

This recent interaction is tangible progress from previous senior leader interactions, such as in May when German Defense Minister Annegret Kramp-Karrenbauer spent time aboard USS Charleston (LCS 18). She met with Charleston’s crew at Naval Base Guam to discuss the shared U.S.-German interest in a free and open Indo-Pacific.

Attached to Destroyer Squadron (DESRON) 7, Charleston, Jackson, and Tulsa and are on rotational deployments to the U.S. 7th Fleet area of operations in support of security and stability in the region, and to work alongside allied and partner navies to provide maritime security and stability.

Check out Naval Library App to find out more about the specifications of the Independence-variant littoral combat ships .