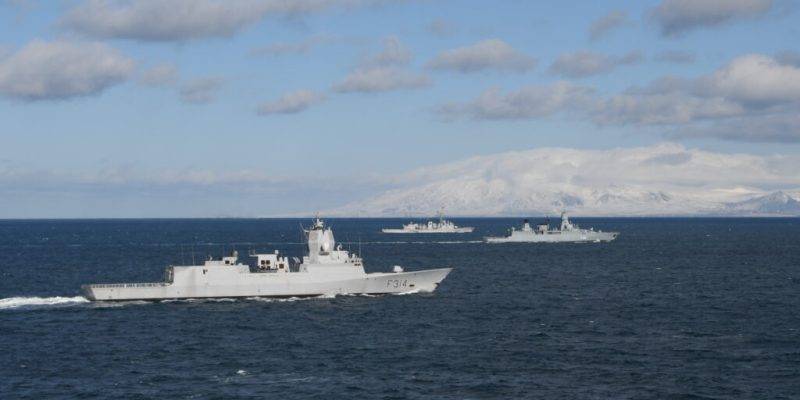 Out at sea, French, German and Norwegian surface combatants were joined by American and German maritime patrol aircraft in a hunt for adversary submarines while small boats from Arlington and Icelandic vessels conducted visit, board, search and seizure missions on suspect vessels.

Out at sea, French, German and Norwegian surface combatants were joined by American and German maritime patrol aircraft in a hunt for adversary submarines while small boats from Arlington and Icelandic vessels conducted visit, board, search and seizure missions on suspect vessels.

Back on land, near Keflavík Air Base, an Icelandic Coast Guard rescue helicopter transported trapped and injured citizens to a temporary medical facility staffed by members of 22nd Marine Expeditionary Unit’s Shock Trauma Platoon and host nation medical personnel for triage and treatment.

For the last two weeks, Allied nations have exercised these capabilities and more, coming together to hone their skills and enhance cooperation during the Iceland-hosted, U.S. Sixth Fleet-executed exercise Northern Viking 22.

“Northern Viking 22 has been incredibly successful for us and for the participating Allies,” said Cmdr. Marvin Ingólfsson, Deputy Commander of Keflavík Air Base. “We have learned from each other these last two weeks and we have shared tactics and procedures, improving our ability to operate together in the defense of Iceland and of the lines of communication that run through this area.”

The exercise, which began April 2 and concluded April 14, initially focused on protecting the critical infrastructure of Keflavík Air Base. Exercise participants established temporary secondary refueling positions for Allied aircraft while working to neutralize security threats to the base and its personnel.

“Northern Viking is really important for our cooperation in the high north seas and to our country in defense of law enforcement scenarios,” said Lt. Ásgeir R. Gudjonsson, the Icelandic Coast Guard improvised explosive device (IED) disposal specialist. “It’s good to have a go at actual events and the training is vital for us. We learned that [different EOD teams] differ a bit, but they’re close – so we can work really well together.”

The first week of the exercise also included air defense scenarios, coordinated shiphandling evolutions and hydrographic and airfield surveys. Throughout the exercise, Allied maritime forces practiced a variety of evolutions to enhance their cooperation and coordination in defending Iceland and the sea lines of communication in the Greenland, Iceland, United Kingdom (GIUK) gap.

“There are several aspects of the exercise that are of specific relevance to us; anti-submarine warfare and cooperation with partner Navies are especially important,” said Cmdr. Arne Pfingst of the Exercises Division at German Navy Headquarters in Rostock. “The exercise took place in an area that is of great interest to the German Navy: The North Atlantic around the GIUK gap.”

Participants shifted their focus during the latter half of the exercise to the Marines of the 22nd Marine Expeditionary Unit (MEU) and Royal Marine Commandos as they conducted multiple ship-to-shore operations, a natural progression in complexity of the overall exercise. Marines and Sailors from the USS Kearsarge Amphibious Ready Group and 22nd MEU participated in a tactical recovery of aircraft and personnel, simulated raids on illicit compounds and visit, board, search and seizure (VBSS) operations.

The teamwork among Icelandic, U.S. and U.K. personnel was fully on display during a distinguished visitor event in Whale Fjord, April 11. The event featured the CH-53s and LCACs conducting a choreographed ship-to-shore operation involving some 200 Allied personnel. Visitors got a front-row seat to the kind of interoperability and teamwork that has informed the success of this exercise throughout its variety of scenario events.

In addition to units on air, land, and sea, other Allied personnel in the exercise control room played integral roles in the exercise. The Portuguese Armed Forces, who have been recently involved in the Air Policing mission in Iceland, provided support to units and personnel involved in Northern Viking. Danish liaison officer Cmdr. Jens Vester (Vet.) advised the multinational Northern Viking team on the waters of the high north, providing a wealth of experience and expertise while also identifying unique skills Denmark could bring to future exercises.

“I think the exercise has gone very well – it’s very professional,” Vester said. “Knowing the waters up here, I know how difficult it is to operate in these rough seas, winds and temperature. It’s a challenging place to be, but Denmark has a lot of experience, and I’m sure we can bring that to the exercise… It’s important to maintain [Allied] presence at the GIUK Gap (the area between Greenland, Iceland, and the United Kingdom), and support [allies and partners] in the region.”

A recurring theme in Northern Viking, much like the earlier Cold Response in Norway, was dealing with the harsh environments and unpredictable climates that Vester mentioned. Ashore and at sea, Allied units learned about the environment and operating in the High North while training alongside their counterparts.

Northern Viking 22, led by the U.S. Sixth Fleet as a maritime-focused event for the first time in decades, established a framework for future iterations of the Northern Viking exercise. As units and personnel depart Iceland for their own national taskings and future missions, the planning cycle for Northern Viking 24 is right around the corner. With lessons learned and invaluable training experiences and opportunities to look back on, exercise planners look forward to building on the successes of Northern Viking 22.

Northern Viking 22 strengthens interoperability and force readiness between the U.S., Iceland and Allied nations, enabling multi-domain command and control of joint and coalition forces in the defense of Iceland and Sea Lines of Communication in the Greenland, Iceland, United Kingdom (GIUK) gap.