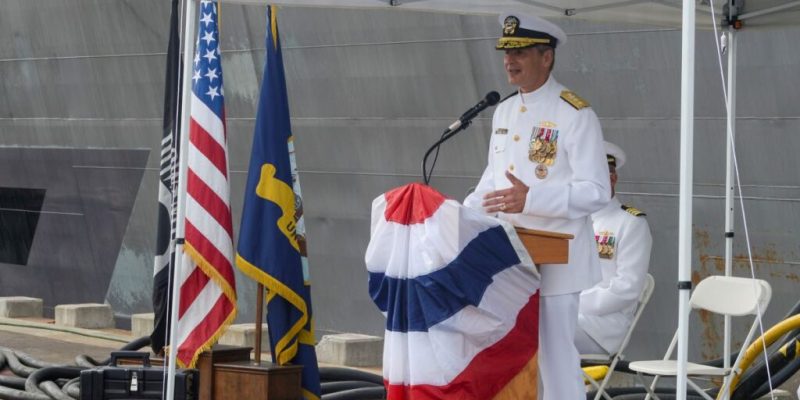 USS Freedom (LCS 1), the lead ship of the Freedom-variant Littoral Combat Ship, recognized more than a decade of naval service during a decommissioning ceremony at Naval Base San Diego on Sept.29

Due to public health safety and restrictions of large public events related to the novel coronavirus (COVID-19) pandemic, the ceremony was a private event celebrated alongside ship plankowners and former crew members.

“I have never in my life seen or served alongside a more capable, dedicated, devoted, talented, and inspiring group of people than the Sailors I served alongside with LCS and what I have watched in every day since.” said Gabrielson. “As we acknowledge this bittersweet moment, I hope well all remember that this ship was a vehicle to learn and innovate by doing and to make real progress in a short amount of time, and that doesn’t happen with other ship concepts.”

Freedom’s commanding officer, Capt. Larry Repass, reflected on the service of his crew and those who came before.

“As we bid farewell to Freedom, her crew consists of superb, highly trained, deeply committed Sailors who are dedicated to mission accomplishment, defense of the nation, and defense of our families,” said Repass. “In them, the spirit of Freedom lives on.”

Freedom maintained a crew of nine officers and 41 enlisted Sailors. The ship was built in Marinette, Wisconsin, by Fincantieri Marinette Marine and commissioned Nov. 8, 2008, in Milwaukee, Wisconsin.

LCS 1 is the second ship in the U.S. Navy to be commissioned as Freedom. The first USS Freedom (ID 3024) was a 5,640-ton troop transport built in 1894 at Hamburg, Germany. Seized by the United States government in 1917, she was renamed Iroquois and operated under charter to the U.S. Army during the rest of World War I. The ship was renamed Freedom in mid-1918 and, in January 1919, was commissioned into the Navy and assigned to the Cruiser and Transport Force. For the next seven months she engaged in returning American servicemen from France, making three round-trip Atlantic voyages. USS Freedom (ID 3024) was decommissioned in September 1919. Freedom (IX-43), an auxiliary schooner, was acquired by the Navy in 1940, and assigned to the Naval Academy where she served in a noncommissioned status as a training ship through 1962.

Freedom has been a test and training ship and was key in developing the operational concepts foundational to the current configuration and deployment of LCS today. The decommissioning of LCS 1 supports department-wide business process reform initiatives to free up time, resources, and manpower in support of increased lethality. The LCS remains a fast, agile, and networked surface combatant, designed to operate in near-shore environments, while capable of open-ocean tasking and winning against 21st-century coastal threats.

LCS are outfitted with mission packages (made up of mission systems and support equipment) that deploy manned and unmanned vehicles and sensors in support of mine countermeasures, anti-submarine warfare or surface warfare missions.

After the decommissioning of Freedom, 21 LCS remain in service to the fleet.

Check out Naval Library App to find out more about the specifications of the LCSs.

What is Cryptocurrency Mining Malware?