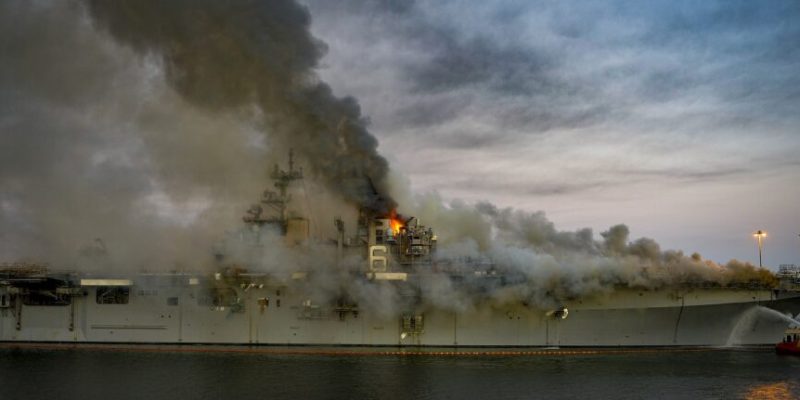 The U.S. Navy released on 20 October two reports related to the fire aboard ex-USS Bonhomme Richard (LHD 6) on July 12, 2020: the results of the U.S. Pacific Fleet Command Investigation and a Major Fires Review commissioned by the Vice Chief of Naval Operations that examined all major fires in the Navy over the last 12 years.

The Navy convened the PACFLT command investigation on USS Bonhomme Richard to specifically examine all causal and contributing factors to the fire that resulted in the total loss of the ship.

There were four categories of causal factors that allowed for the accumulation of significant risk and led to an ineffective fire response: the material condition of the ship, the training and readiness of the ship’s crew, the integration between the ship and supporting shore-based firefighting organizations, and the oversight by commanders across multiple organizations. The command investigation also concluded “a lack of familiarity with requirements and procedural non-compliance at multiple levels of command” contributed to the loss of ship.

VCNO Adm. Bill Lescher emphasized the Navy’s commitment to making urgent and necessary changes to correct the deficiencies and related root causes that led to the Bonhomme Richard fire.

“The loss of USS Bonhomme Richard was completely preventable,” said Lescher. “And the Navy is executing a deliberative process that includes taking appropriate accountability actions with respect to personnel assigned to Bonhomme Richard and the shore commands designed to support the ship while moored at Naval Base San Diego.”

Lescher designated the commander of the U.S. Pacific Fleet as the Consolidated Disposition Authority to handle administrative and disciplinary actions relating to military members. Recommendations concerning civilian employees will be forwarded to the cognizant supervisor for action. Based on a separate criminal investigation, Commander, U.S. 3rd Fleet preferred charges against one Sailor who is charged with aggravated arson and hazarding a vessel. A preliminary hearing for the Sailor is scheduled for mid-November.
The investigation was exhaustive in scope, yielding more than 1,000 findings of fact associated with the fire resulting in 242 opinions based on those findings, 139 recommendations for corrective action by various organizations at levels throughout the Navy, and listing 36 individuals recommended for accountability actions.

Additionally, the report recognized the “bravery, ingenuity, and resourcefulness in the actions of Sailors across the San Diego waterfront and others who had a role in the response,” and identified 10 meritorious performance recommendations for actions taken during the firefighting efforts.

Alongside the Bonhomme Richard investigation results, the Navy also released the results of the Major Fires Review, ordered in January 2021 by the VCNO. A comprehensive historical review of major fires aboard U.S. Navy ships, the Major Fires Review aimed at identifying recurring trends in the causal factors of 15 major shipboard fires over the past 12 years.

The expansive review included 12 major findings contributing to a current state of elevated risk for ships in maintenance availabilities with seven strategic recommendations for corrective actions.

The Major Fires Review revealed that ineffective learning, the persistence of underlying weaknesses in shipboard watchstanding standards, hazardous and combustible material stowage, and training were the primary issues contributing to a lack of enduring change and in shipboard fires.

To address the findings of the Command Investigation and the Major Fires Review, the Navy established a Learning to Action Board to both implement the recommendations and to assess their ongoing execution over time, testing both whether the recommendations remain in effect and whether they are providing the intended effect.

The first L2AB convened October 13, 2021, and will meet quarterly to provide a structure, process, and forum to drive accountability for implementing and assessing approved recommendations through Fleet, Type Command, and Systems Command ownership.

“The Learning to Action Board provides the structure and cadence of accountability for learning that will make these recommendations come alive with urgency,” said Lescher.

Check out Naval Library App to find out more about the specifications of the WASP class LHDs.