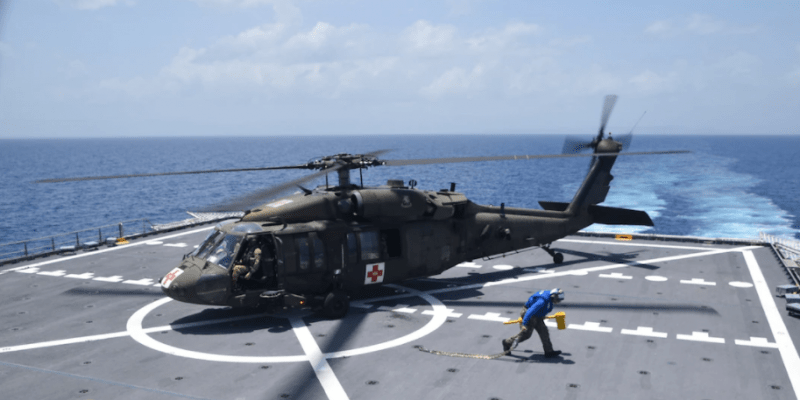 Both ships are supporting U.S. Agency for International Development (USAID) and Bureau for Humanitarian Assistance (BHA) following a 7.2-magnitute earthquake that struck Haiti on Aug. 14, 2021.

Burlington is utilizing its ScanEagle unmanned aerial system (UAS) to obtain aerial images of the destruction on the ground which helps relief planners determine where supplies are needed, what airfields can be used, and what roadways are accessible.

Both Burlington and Billings, along with her embarked MH-60S Seahawk assigned to Helicopter Sea Combat Squadron (HSC) 28, will be prepared for any additional tasking such as afloat refueling from U.S. Southern Command Joint Task Force-Haiti, commanded by Navy Rear Adm. Keith Davids, which was stood up to coordinate military support.

They join other U.S. Southern Command components and U.S. Coast Guard ships already on station, in addition to allies and partners from the Netherlands, France, and United Kingdom.

USS Billings and USNS Burlington have been to deployed to the U.S. 4th Fleet area of operations to support Joint Interagency Task Force South’s mission, which includes counter-illicit drug trafficking missions in the Caribbean and Eastern Pacific.

Check out Naval Library App to find out the specifications of spearhead-class expeditionary fast transport ships.

An update to how we generate web page titles