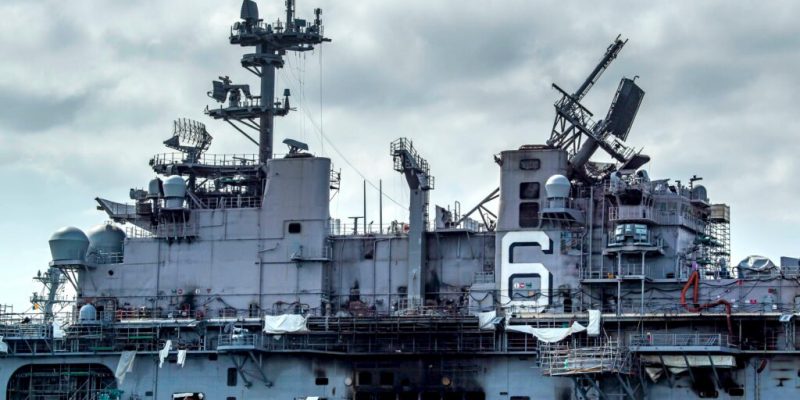 As part of USS Bonhomme Richard’s (LHD 6) on-going inactivation availability, contractors will start the process of removing the ship’s island, Feb. 23. Removal of the island will improve the ship’s structural integrity and readiness for tow. The removal process will reduce the island’s height down to just above the ship’s flight deck. The salvage contractor, SMIT AMERICAS will conduct the work under an existing contract with the Navy.

The final timeline for towing and dismantlement is still being determined.

What happened to USS Bonhomme Richard?

On 12 July 2020, a fire started on a lower deck while the ship was undergoing maintenance at Naval Base San Diego. It took four days for firefighters to extinguish the fire, which injured at least 63 sailors and civilians and severely damaged the ship.

After thorough consideration, the U.S. Navy has decided to decommission USS Bonhomme Richard (LHD 6) on 30 November 2020,

Following the fire, the U.S. Navy conducted a comprehensive material assessment that concluded the cost to restore Bonhomme Richard could exceed $3 billion and require between five and seven years to complete.

The U.S. Navy also examined rebuilding the ship for alternate purposes and determined the cost could exceed $1 billion, which is as much or more than a new-construction hospital ship, submarine tender, or command-and-control ship.

All investigations associated with the fire onboard USS Bonhomme Richard remain ongoing.

The Bonhomme Richard is assigned to the Commander, U.S. Pacific Fleet.

By OTC5 days ago31 views

By OTC6 days ago38 views