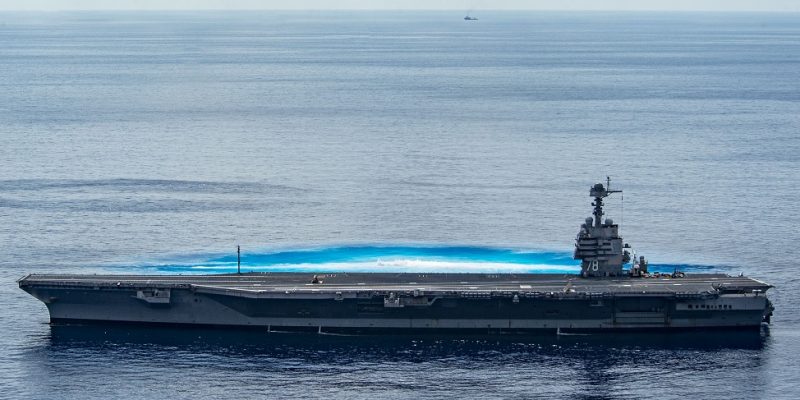 Metcalf said that the goal of the tests is to ensure that Ford’s integrated combat systems perform as designed and added: “the tests demonstrated—and proved to the crew, fairly dramatically—that the ship will be able to withstand formidable shocks and continue to operate under extreme conditions.”

Gerald R. Ford is returning to the Tidewater area for a six-month Planned Incremental Availability (PIA). As the PIA begins, teams will conduct additional detailed inspections, assess any damage sustained during the shots, and continue modernization and maintenance work in advance of workups for the ship’s deployment in 2022.

Rear Adm. James P. Downey, program executive officer for aircraft carriers, rode the ship during the first and third shock evolutions and observed the historic trials, first-hand. “FSST has proven a critical investment in the Ford-class development,” said Downey. “The ship and crew performed exceptionally in these very strenuous conditions and continued their operations throughout the shock events, demonstrating the ship’s ‘fight through capability.”

“We’re designing and building these aircraft carriers to sail in some of the world’s most contested security environments. So when you think about the threats to warships posed by non-contact blasts and the number of sea mines in the inventories of navies around the world, the gravity and consequence of these shock trials really come into focus. The Navy’s ongoing investment in the design, including this modelling, will help ensure the resiliency of Ford’s integrated, mission-critical systems in underway threat environments.”

Downey added that the trial’s ultimate success hinged on the extraordinary performance of the ship’s force, in coordination with crews on several surface and aviation platforms that support FSST.

“The countdown to the actual shot is choreographed down to the smallest detail, and the coordination between the ship and the other surface and aviation platforms, as well as the on-scene environmental scientists, has been impressive.”

Prior to each shot, the FSST team notified mariners to avoid the test area and implemented extensive protocols to ensure the safety of military and civilian personnel participating in the operation. A team of more than a dozen scientists, biologists, and observers were assigned to Ford, nearby support vessels, and observation aircraft. Observers used high-powered lenses to detect marine life at great distances, through ocean waves and white caps.

During the sequence of events leading up to each shot, crews operated in a heightened state of watchful readiness in anticipation of the ultimate go/no-go decision, which had to be made between 4:00 and 8:00 a.m. on the day of the scheduled blast.

Ford’s Commanding Officer, Capt. Paul Lanzilotta, was the tactical commander that ordered the go/no-go decision, based on the interplay of several crucial variables, such as ship and crew readiness, weather, and sea state, as well as pre-set environmental mitigation measures, designed to protect any marine life spotted within the test area.

“Safety was always the driving consideration throughout the shock trials,” recalled Lanzilotta. “So, once we were ready and in position, pausing the countdown to the shot could really test our focus and persistence.”

“In spite of months of detailed preparation, you can’t always count on the weather,” he said. “But the crew hung in there, and showed the great tenacity and professionalism reflective of their pride in our Warship.”

“So many pieces had to fall into place to execute Ford’s FSSTs within the testing window,” said Capt. Lanzilotta. “Success required equal measures of technical expertise, trust, and courage—traits you’ll find in great supply on Warship 78 and throughout the entire Ford Shock Trial Team. These shots have only strengthened my confidence in the durability of this ship, and the excellence of the crew who came out here to own it, and absolutely crushed it.”

The U.S. Navy has conducted FSSTs over several decades, most recently for the Littoral Combat Ships USS Jackson (LCS 6) and USS Milwaukee (LCS 5) in 2016; as well as on the San Antonio-class amphibious transport dock USS Mesa Verde (LPD 19) in 2008, the amphibious assault ship USS Wasp (LHD 1) in 1990, and the guided-missile cruiser USS Mobile Bay (CG 53) in 1987. The last aircraft carrier to execute FSST was USS Theodore Roosevelt (CVN 71) in 1987.

The Navy conducted the Gerald R. Ford shock trial testing in accordance with Office of the Chief of Naval Operations Instruction 9072.2, and as mandated by the National Defense Authorization Act of 2016. The first two shots of the FSST sequence occurred on June 18 and July 16.

Check out Naval Library App to find out more about the specifications of USS Gerald R. Ford.