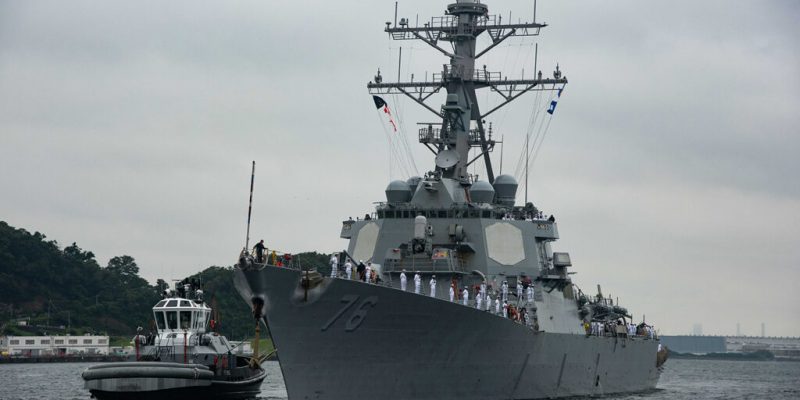 Higgins and Howard’s arrival brings striking power and operational readiness to maintain a presence in the region, preserve peace and security, and further our maritime partnerships.

“We are excited to have Higgins and Howard join our forward-deployed team,” said Capt. Chase Sargeant, commander, Task Force (CTF) 71. “These two ships will be an integral part of the 7th Fleet team for years to come.”

“These destroyers are some of the most capable ships our Navy has to offer,” added Sargeant. “Adding them to our forward deployed forces is a clear signal of our continuing commitment to our partners and allies, and our mutual commitment to maintaining stable regional maritime security.”

Sailors and their family members received relocation briefings and support, to include the current Commander Naval Forces Japan COVID-19 mitigation measures all service members and their families are expected to adhere to. These measures ensure the United States Navy is doing its part to stop the spread of the corona virus and protect Sailors, their families and the local community.

As the U.S. Navy’s largest forward-deployed fleet, 7th Fleet employs 50 to 70 ships and submarines across the Western Pacific and Indian Oceans. U.S. 7th Fleet routinely operates and inter-acts with 35 maritime nations while conducting missions to preserve and protect a free and open Indo-Pacific region.

USS Higgins (DDG-76) is an Arleigh Burke-class destroyer (flight II). Higgins, is the 26th ship of her class, the 15th of the class to be built by Bath Iron Works of Bath, Maine. Construction began on 14 November 1996 and she was launched and christened on 4 October 1997. She was commissioned at a ceremony in Port Everglades, Florida on 24 April 1999.

USS Howard (DDG-83) is an Arleigh Burke-class destroyer in the United States Navy. She is named for Medal of Honor recipient First Sergeant Jimmie E. Howard, USMC. This ship is the 33rd destroyer of her class. USS Howard was the 19th ship of this class to be built by Bath Iron Works at Bath, Maine, and construction began on 8 December 1998. She was launched and christened on 20 November 1999. She was commissioned into the Navy on 20 October 2001.

Check out Naval Library App to find out the specifications of the Arleigh Burke Class Destroyers.