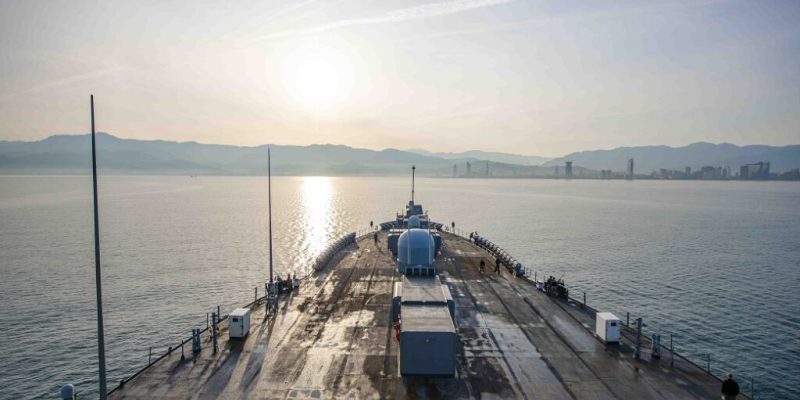 The port visit highlights an important relationship between NATO allies and vital Black Sea partner Georgia. Georgia has been a consistent and steadfast partner in promoting peace and stability in the region.

“Georgia plays a critical role in maintaining security and stability in the Black Sea and is a valuable NATO partner,” said Rear Adm. James Morley, Deputy Commander, Naval Striking and Support Forces NATO (STRIKFORNATO). “We look forward to further enhancing the relationship between NATO and our Georgian counterparts here in Batumi.”

U.S. Sixth Fleet (SIXTHFLT) and STRIKFORNATO personnel are embarked aboard Mount Whitney, operating as an integrated team. The interoperability between the commands, and their presence in the region, demonstrates the U.S. and NATO’s commitment to the Black Sea and to working with allies and partners to advance peace and prosperity in the region.

While in Batumi, the ships’ crews will experience Georgian culture and traditions, while taking in the country’s rich history and interacting with local citizens.

“This is my first ship and first deployment with the Navy and being able to visit Georgia is exciting,” said Cryptologic Technician (Technical) 2nd Class Melissa Mitchell, a Sailor assigned to Mount Whitney. “I have always wanted to go to Georgia and experience the culture and cuisine.”

While steaming to Batumi, Mount Whitney and Porter showed the power of joint operations by participating in the U.S. Air Forces Europe-Air Forces Africa (USAFE-AFAFRICA) led Operation Castle Forge. Castle Forge provides a dynamic, partnership-focused training opportunity in the Black Sea and demonstrates the joint force’s combined ability to respond in times of crisis with a flexible, reassuring presence.

Additionally, both ships partook in bilateral ship maneuvering drills, communication testing, and simulated exercises with ships from the Bulgarian Navy and Turkish Navies and were escorted into Batumi by the Georgian Coast Guard.

Check out Naval Library App to find out more about the specifications of the Blue Ridge-class command and control ship.