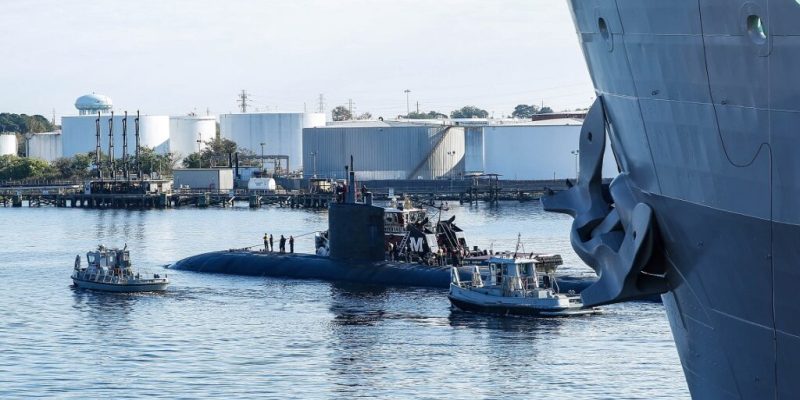 The Los Angeles-class submarine spent just over a year at NNSY to replace, repair, and overhaul components throughout the boat, as the shipyard’s first DSRA in a decade.

USS Pasadena served as NNSY’s pilot project leveraging the Naval Sustainment System—Shipyards (NSS-SY) program. NSS-SY is underway at all four public shipyards, leveraging industry and government best practices on shipyard processes to drive quick and visible improvements in ship maintenance. During the overhaul, Navy leaders such as Acting Secretary of the Navy Thomas Harker visited NNSY and met with the Pasadena team to pledge their support and discuss the drive to “get real, get better,” encouraging shipyards to candidly discuss any constraints so they can be resolved.

NSS-SY initiatives included establishing an Operations Control Center to drive project team communications and resolve barriers in work execution, and “crew boards” to track jobs supporting the boat’s overhaul. Deputy Project Superintendent Mike Harrell was brought onto the project for standing up the center and was instrumental in breaking down barriers to ensure non-stop execution of the critical chain of work, driving through issues and constraints to completion. While USS Pasadena did not meet its original completion date, these improvements helped deliver the boat back to the Fleet and are being implemented on other NNSY overhauls, including USS Toledo (SSN 769) and USS Dwight D. Eisenhower (CVN 69).

“Following a tremendous amount of effort and teaming on a very challenging availability, Pasadena has returned to the Fleet to meet its significant operational commitment for our Navy and Nation,” said Shipyard Commander Captain Dianna Wolfson. “The Pasadena project team met our Navy leadership challenge to ‘get real, get better in several significant ways, and their efforts will pay off as we leverage their learning across America’s Shipyard and our NAVSEA enterprise. I am so proud of and thankful to our project team and everyone in America’s Shipyard who supported them throughout this availability as One Team!”

Project Superintendent Frank Williams said the project team stayed focused throughout all phases of the availability on knowledge sharing and maintaining the schedule. Beyond NSS-SY improvements, Pasadena’s team incorporated lessons learned from Portsmouth Naval Shipyard’s USS Newport News (SSN 750) DSRA in planning the availability and executing similar jobs. Additionally, when Pasadena missed its original undocking date in the spring, the project team worked to perform more jobs with the boat on keel blocks to condense the schedule following undocking.

“Sailors and ships are meant to be at sea and not in a repair environment and throughout all phases of the availability, it’s been our job to get them back there,” said Williams. “The project team has done a great job keeping focused on this throughout the past 13 months. Thanks to all the efforts of our team and Ship’s Force, we have now gotten Pasadena back to the sea where she belongs!”

Check out Naval Library App to find out more about the specifications of the Los Angeles-class submarines.

Kongsberg plans to offer Vanguard platform to the Mediterranean market

By OTC11 hours ago7 views