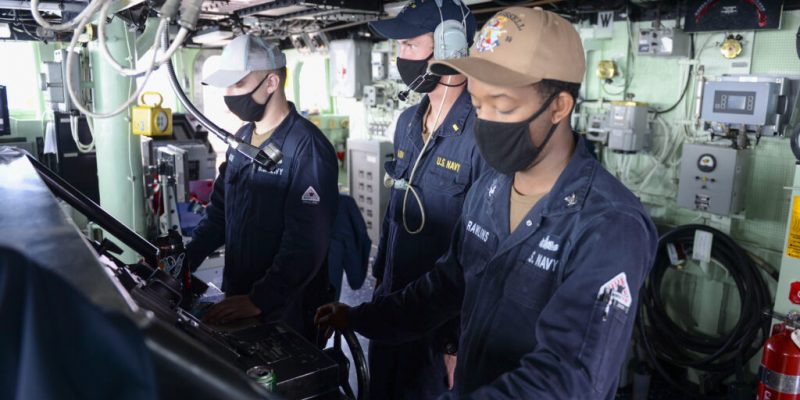 The Arleigh Burke-class destroyer USS Russell (DDG 59) asserted navigational rights and freedoms in the Spratly Islands, consistent with international law, the U.S. Navy announced. This freedom of navigation operation (“FONOP”) upheld the rights, freedoms, and lawful uses of the sea recognized in international law by challenging restrictions on innocent passage imposed by China, Vietnam, and Taiwan.

“The United States challenges excessive maritime claims around the world regardless of the identity of the claimant. The international law of the sea as reflected in the 1982 Law of the Sea Convention provides for certain rights and freedoms and other lawful uses of the sea to all nations. The international community has an enduring role in preserving the freedom of the seas, which is critical to global security, stability, and prosperity.” says in the press release.

Other statements at the press release as follows;

China, Vietnam, Taiwan, Malaysia, Brunei and the Philippines each claim sovereignty over some or all of the Spratly Islands. China, Vietnam, and Taiwan require either permission or advance notification before a foreign military vessel engages in “innocent passage” through the territorial sea. Under international law as reflected in the Law of the Sea Convention, the ships of all States –including their warships –enjoy the right of innocent passage through the territorial sea. The unilateral imposition of any authorization or advance-notification requirement for innocent passage is not permitted by international law. By engaging in innocent passage without giving prior notification to or asking permission from any of the claimants, the United States challenged these unlawful restrictions imposed by China, Taiwan, and Vietnam. The United States demonstrated that innocent passage may not be subject to such restrictions.

U.S. forces operate in the South China Sea on a daily basis, as they have for more than a century. They routinely operate in close coordination with like-minded allies and partners who share our commitment to upholding a free and open international order that promotes security and prosperity. All of our operations are designed to be conducted professionally and in accordance with international law and demonstrate that the United States will fly, sail, and operate wherever international law allows –regardless of the location of excessive maritime claims and regardless of current events.

USS Russell (DDG-59) is an Arleigh Burke-class destroyer in the United States Navy. She is the second ship of the USN to carry the name Russell.