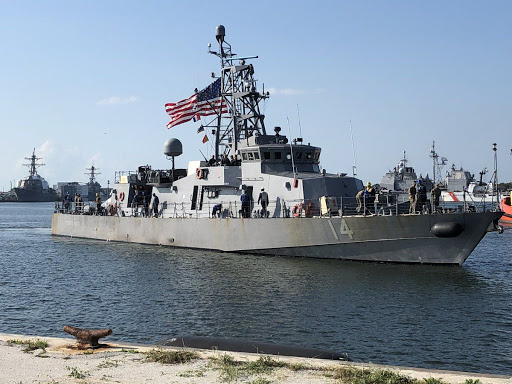 The US Navy held the decommissioning ceremonies of the coastal patrol ships USS Shamal (PC 13), USS Zephyr (PC 8), and USS Tornado (PC 14) at Naval Station Mayport, between 16-18 February, the U.S. Navy announced with a press release.

Patrol coastal ships (PCs) were designed to provide littoral operations such as patrolling coastlines and interdiction surveillance. They are particularly suited for maritime homeland security missions and can quickly respond to emergent requirements in a shallow water environment. PCs also work together with the U.S. Coast Guard to help protect the U.S. coastline, ports, and waterways from terrorist attacks, illegal drugs, and illegal immigration.

During their time in service, these three ships have been vital in the counter-narcotics patrols and illegal migration patrols in the coastal waters of the United States, Central America, and Caribbean Islands.

“These three warships have served our Navy and our country well,” said Capt. Mike Meyer, commander, Naval Surface Squadron Fourteen. “Each of them has operated well past their designed service life, with their crews contributing demonstrably to meeting our national objectives.”

Shamal pursued and seized a 45-foot go-fast boat, which led to the recovery of 19 bales of marijuana weighing more than a ton in 2005. They also located a hidden compartment containing more than a ton of cocaine on a 165-foot coastal freighter. Shamal and her crew participated in the Coast Guard’s response to the devastation caused by Hurricane Katrina in 2005. On its final mission in September 2020, Shamal and her crew worked alongside the Coast Guard in seizing nearly two-and-a-half tons of marijuana, with a street value of eight million dollars, and the detaining of seven suspected narcotics traffickers.

“Shamal is leaving behind a storied legacy of operating in the waters of the United States and abroad”, said Lt. Cmdr. Dan O’Neill, commanding officer, Shamal. “Her crew, past and present, can stand proud of her accomplishments and service to our Nation.”

Zephyr was one of the first ships to respond to the Deepwater Horizon oil rig explosion in the Gulf of Mexico and assisted in searching for survivors in April 2010 while on loan to the Coast Guard in an inter-service transfer from 2004-2011. Besides, Zephyr confiscated seven tons of cocaine while apprehending 17 drug traffickers during counter-narcotics patrols. In 2020, Zephyr, along with two U.S. Navy guided-missile destroyers, two Coast Guard cutters, and two British Royal Navy ships, seized approximately 12,100 pounds of cocaine 5,759 pounds of marijuana worth an estimated $216 million.

“In her service life, Zephyr has crossed the Pacific and Atlantic oceans, circumnavigated South America, and executed numerous patrols in support of the U.S. 4th Fleet,” said Lt. Cmdr. Steven Terjesen, commanding officer of USS Zephyr. “Her Sailors have always met every challenge head-on, exemplifying their ship’s motto: ‘Leading the Charge.’ I believe I speak for all Zephyr Sailors, past and present when I say that it was a true honor and privilege to serve onboard this mighty warship.”

Working within Joint Interagency Task Force South, Tornado contributed to the disruption of more than 40 tons of cocaine and two tons of marijuana with an estimated street value of nearly 850 million dollars in 2020.

“This class of ship provides an extremely high rate of return to the American public,” said Lt. Cmdr. G. Graham Van Hook, commanding officer, USS Tornado. “The Sailors onboard are the most impressive Sailors I have ever served with.”

Patrol coastal ships were originally built with a 15-year design life service, but with incremental modernization and maintenance periods, this class of ships has reached an average age of 26 years. The eldest ship in this decommissioning class, Zephyr, has more than doubled her designed life service and would have turned 27 this October, while the youngest of the three, Tornado, would have been 21 this June.

The decision to decommission these three ships stems from the fact that they have all exceeded their designed service life. Based on the rising cost of modernization efforts, the Navy will receive a better return by decommissioning and freeing up funds to invest in other platforms.

With the Shamal, Tornado, and Zephyr decommissioning, there are now 10 patrol coastal ships remaining in service, all of which are homeported in Manama, Bahrain.

Following their decommissioning ceremonies, the ships will be designated as “Out of Commission in Reserve”. They will sail to the Navy’s Inactive Ship’s facility in Philadelphia, where they will await their official decommissioning designation, which will take place in March 2021.