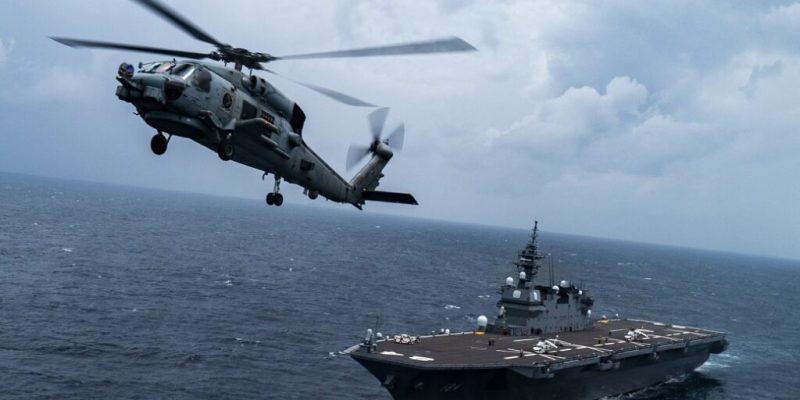 Cooperative maritime engagements and U.S. carrier operations in the South China Sea are part of the U.S. Navy’s routine presence in the Indo-Pacific.

“Bilateral operations are one key component in our collective maritime readiness,” said Rear Adm. Dan Martin, commander, CSG 1. “The Indo-Pacific is a dynamic region and by continuing to conduct routine operations with our allies and partners throughout international waters and airspace, we demonstrate our unwavering commitment to upholding international law, on the sea and in the air, and to ensuring that all nations can do the same without fear or contest.”

Since arriving in the U.S. 7th Fleet region, CSG 1 units have participated in multiple operations and exercises with JMSDF units, most recently MALABAR 2021 and Maritime Partnership Exercise. JMSDF Rear Adm. IKEUCHI Izuru, Commanding Officer of IPD21 force, Commander of Escort Flotilla 3 said maritime alliances and partnerships are vital to maritime security and underpin the free flow of commerce and access to resources in the region.

“Through a series of large-scale exercises, the JMSDF was able to enhance its tactical capabilities as well as strengthen its cooperative relationship with the navies of participating countries,” said Rear Adm. IKEUCHI Izuru, Commanding Officer of IPD21 force, Commander of Escort Flotilla 3. “Our activities in the South China Sea and Indian Ocean, which are important international maritime traffic routes, together with the navies of our allies and partners who share our fundamental values and strategic interests, demonstrate our unity and strong will to realize a “free and open Indo-Pacific” based on law.”

Check out Naval Library App to find out more about the specifications of the Izumo-class carriers.