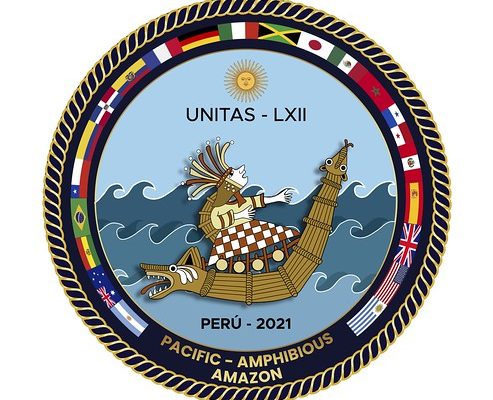 This year’s exercise is hosted by the Peruvian Navy and will include 29 warships/vessels, four submarines, and 20 aircraft that will conduct operations off the coast of Lima and in the jungles of Iquitos through Oct 6.

The initial in port phase will include cultural exchanges including sporting events, community relations projects, an international cuisine festival, and city tours to build relations between participating nations.

Following opening ceremonies, the ships will head to sea to conduct combined and joint operations as a multi-national task force, executing an event-driven scenario to train in multiple warfare areas.

UNITAS, which is Latin for “unity,” was conceived in 1959, first executed in 1960 and held every year since. This year marks the 62nd iteration of the world’s longest-running annual multinational maritime exercise. Additionally, this year Peru will celebrate their bicentennial, a historical milestone commemorating 200 years of the country’s independence.

UNITAS develops and sustains relationships that improve the capacity of our reemerging and enduring maritime partners to achieve common objectives. Additionally, the military-to-military exchanges foster friendly, mutual cooperation and understanding between participating navies and marine corps.

Check out Naval Library App to find out the specifications of the U.S. Marine Corps assets.

By admin8 hours ago14 views

By admin9 hours ago15 views

By admin10 hours ago13 views

By admin2 days ago34 views