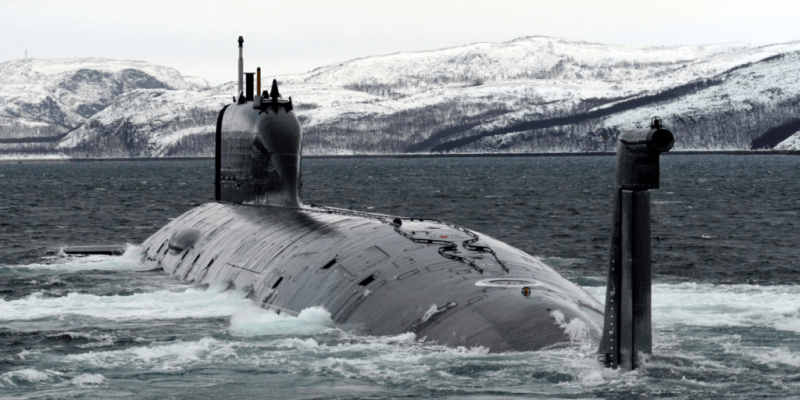 On July 30, a solemn ceremony was performed at the Sevmash Shipyard in Severodvinsk for the Yasen-M class nuclear-powered submarine “Krasnoyarsk.” Admiral Nikolai Evmenov, Commander-in-Chief of the Navy, and other senior officials attended the ceremony. The U.S. military is concerned about the Yasen submarine class. Several months ago, the U.S. Navy’s top submarine officer, Rear Admiral Dave Johnson, remarked, “We’ll be facing against really formidable adversaries.” One need look to Russia’s version of a nuclear-guided missile submarine, the Severodvinsk [first vessel of the Yasen class] (SSGN). “He was so impressed with this ship that he made a replica using unclassified data to view it every day on his way to work.” Krasnoyarsk is the third Project 885-M ship built by the Russian Navy. Yasen M-class nuclear-powered multifunctional attack submarine.

Yasen-M is designed to significantly advance the original Yasen class based on the lessons learned over the lengthy development, building, and testing process. According to reports, the Yasen-M design is quieter than the leading Yasen-class submarine. In addition, it is constructed using low magnetic steel to minimize its magnetic signal, making it far more difficult to detect. Unlike prior Soviet vessels, the Yasen class are multi-mission vessels comparable to the American Seawolf or Virginia classes.

Yasen M is Russia’s first submarine class to include a spherical sonar. Krasnoyarsk’s sensor suite comprises an Irtysh-Amfora spherical sonar array located on the bow, flank sonar arrays, and a towed array for backward detection. It is equipped with a navigation/surface search radar, the MRK-50 Albatross (Snoop Pair). Additionally, it includes the Rim Hat electronic support package. The Yasen M class is equipped with ten VLS (Vertical Launch System) silos, two more than the original Yasen. Krasnoyarsk’s ten VLS silos can accommodate 40 [10 x 4]P-800 Oniks missiles. The P-800 Oniks, also known as Yakhont, is a supersonic anti-ship cruise missile with 600 kilometers (373 miles). It is capable of reaching Mach 2.5. It features an advanced guiding system. Because Onik is a fire-and-forget missile, Krasnoyarsk can maneuver safely once the missile is launched.

The P-800 begins its flight with satellite guidance and ends with active radar tracking of its target. It is critical to remember that certain types of Oniks are capable of carrying a nuclear warhead. The ten VLS silos can be utilized to deploy 50 [10 x 5] various Kalibr missile types. Certain Kalibr variants are comparable to the American Tomahawk cruise missile in several criteria, including range, warhead, and propulsion. These range 2500 kilometers (1554 miles), are armed with a high-explosive warhead weighing 450 kilograms or 1000 pounds and are propelled by a turbofan motor. They, like the Tomahawk, have a Mach 0.8 top speed. Specific models of the missile have the second stage of propulsion, enabling a supersonic charge to the target during the terminal approach, reducing reaction time. Kalibr, like Oniks, is capable of carrying nuclear weapons.

The torpedo tubes are angled due to the vast size of this spherical array. In other words, unlike the earlier Akula class, the torpedo tube outer doors are relocated aft. The design of Krasnoyarsk allows ten 650 mm torpedo tubes. The tubes are capable of transporting 30 [10 x 3] heavyweight torpedoes. These are capable of carrying Type 65 torpedoes. It was designed to be used against aircraft carrier combat groups of the U.S. Navy and big merchant targets such as supertankers and modern enemy submarines. Torpedoes have a range of 100 kilometers (62 miles). It is armed with a 550 kilogram (1212 pound) warhead. This torpedo’s single impact can sink a giant battleship.

In its current state, Krasnoyarsk is a powerful threat to any adversary. However, this is not the end; sources say the submarine will be outfitted with hypersonic Zircon missiles, enhancing their lethality. The missile travels at approximately Mach 9 and can fly at low altitudes, making it nearly unstoppable. Zircon is also heavy and fast; together with the explosive warhead, it will have a lot of Kinetic Energy, and a single hit from it may cripple even an American supercarrier. Another critical component of the missile is that the air pressure in front of it creates a plasma cloud that absorbs radar rays, effectively rendering the missile undetectable. Thus, it is evident that Russia’s foes, especially the United States, have reason to be concerned about Krasnoyarsk.

Check out Naval Library App to find out more about the specifications of the Yasen-M class submarines.

US Approves Possible Sale of MH-60R Helicopters to Australia