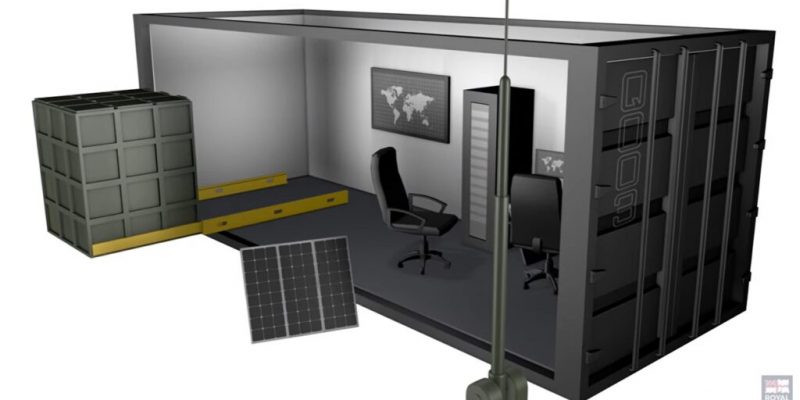 The Royal Navy’s Second Sea Lord VAdm Nick Hine said during his speech at the DSEI 2021 exhibition in London on September 15 that the Royal Navy wanted to detach capability from platforms as he shed more light on the NavyPODS concept.

PODS are interchangeable modules that can be fitted to the surface fleet. Similar in design to a shipping container, the PODS create the idea of a ‘plug and play’ warship and will enable Royal Navy ships of all sizes to be more adaptable and versatile when deployed.

Delivered using innovative technology such as heavy-lift drones or autonomous boats, a ship will be able to receive the equipment it needs to be re-tasked quicker without the need to go into a port to collect it.

Large in size, the PODS will house assets vital to supporting Royal Navy operations. These may include an autonomous boat for surveillance and reconnaissance, quadcopter drones to deliver supplies, humanitarian aid and disaster relief stores or medical equipment. Versatile in their approach, they have the capacity to become an additional medical room for service personnel at sea or a control centre for Royal Marines’ operations.

What’s inside the POD?

Individual PODS will contain a system, or multiple systems which contribute towards a mission specific capability. We have already started to conceptualise and work on several options including, but not limited to:

Only by bringing PODS and platforms together will true operational effect be achieved. Interchangeable, Interconnected and Integrated PODS will bring agility to respond to the variety of tasking. Irrespective of location, our platforms will be more flexible, effective, productive and READY when serving alone or within a Task Group.

The future of the Royal Navy and how it could further embrace autonomous technology, including drones, has been unveiled.

Led by a design challenge for young engineers from UK Naval Engineering Science and Technology (UKNEST), the Royal Navy will develop a Future Autonomous Fleet programme that could shape how it operates over the next 50 years.

Stemming from the design challenge, the future vision envisages drones based in the stratosphere to be launched at a moment’s notice; un-crewed fast attack crafts housing smaller autonomous boats; aircraft carriers propelled by both sea-based biofuels and wind power; and an underwater flagship at the centre of the fleet. Other conceptual ideas include the increased use of artificial intelligence to assist with low-level planning and underwater transport units carrying anything from munitions to food.

Check out Naval Library App to find out the specifications of the Royal Navy assets.